Paralympic nomination on the line at WPE Penrith

Three Australians are on the verge of ticking the final selection box for nomination to the Australian Paralympic Committee (APC) for this year’s Rio Games when they line up in Sunday’s World Para-triathlon Event (WPE) at Penrith. 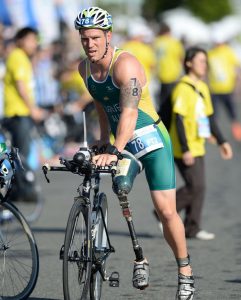 Para-triathlon will make its debut in Rio with six medal events on the program.

It will be an historic day for the sport of Para-triathlon, which has captured the imagination of the multi-sport world since its inclusion on the Rio 2016 Paralympic program.

Australia has been very much to the fore of Para-triathlon world with outstanding performances at last year’s ITU World Championships in Chicago.

It has been a dream of the 40-year-old’s to qualify for Rio and Sunday will give him the opportunity of seeing that dream come true.

Chaffey suffered four broken vertebrae with spinal cord damage spending five months in hospital but his determination and resolve has seen him become not only an elite Para-triathlete but an inspiration along the way.

Chaffey will be joined by fellow PT1 competitors Nic Beveridge and Scott Crowley who finished second to Chaffey at Oceania and National Championships this year.

They will be joined by British competitor Joe Townsend, a top 10 finisher in Chicago and 2016 African Champion Anton Swanepoel (RSA) who had a technical problem in Chicago and will be seeking amends after his DNF.

Doughty, a Melbourne-based Performance Psychologist and WA’s 2004 Paralympic cyclist Claire McLean will line up in the PT4 class.

The 32-year-old Doughty was born without her right hand but has gone on to carve a remarkable international sporting career in Para-equestrian and now Para-triathlon.

When Para-triathlon was added to the Rio program, Doughty swapped her love of horses for a bike and has been an overnight sensation under Australia’s National Para-triathlon coach Corey Bacon.

McLean, who lost the use of her arm in a motorbike accident, represented Australia at the 2004 Athens Games, winning silver in the time trial and won the World Time Trial Championship in 2006.

She was eighth at the World Championship after winning the WPE on the Sunshine Coast.

The PT4 is far and away the strongest field of all the categories with five of the top eight from Chicago including reigning world champion Lauren Steadman from Great Britain and her fellow countrywoman and former world champion Clare Cunningham.

Garvey from WA, a congenital above-knee amputee will be joined in the PT2 men by Glen Jarvis while the PT4 for men will see Jack Swift, Joshua Kassulke, Tony Scoleri in action.

The P2 field will see Garvey verses Andrew Lewis (Great Britain) after Lewis did an extra lap on the bike course in Chicago after clocking a faster swim and run than Garvey.

To meet the First Round Nomination criteria athletes must have placed in the top six at the 2015 ITU Elite Paratriathlon World Championships, won the 2016 Oceania Championships, have an international classification with the required status and, which is effectively for the Penrith WPE: “Competed in at least one WPE between January to April 2016 and finished first Australian and top 3”.

The six highest ranked athletes at the end of the Paralympic Qualification listing period (1 July 2015 to 30 June 2016) and not including the 2015 World Champion, all earn a qualifying slot for their country and the Federation then selects the athlete to use that spot.

Penrith is the only WPE within this time frame that Australians will compete at.

There are only four more WPE races in the world after Penrith and before 30 June: Aguilas (Spain) and Yokohama (Japan) on 14th May, Strathclyde on 4th June and Besancon (France) on 19th June.
Chicago Open (similar to Age Group) World Champ Joshua Kassulke (QLD PT4) and silver medallist Sara Tait (QLD PT1) who are new athletes developing into Elite racing will also be competing.  This will be Josh’s second WPE and Sara’s first.

There will also be an Open Paratriathlon and TWD race also held at Penrith.  This race is the final qualifying race for athletes hoping to earn selection for the 2016 Open World Paratriathlon Championships.

This year’s Elite and Open Paratriathlon Championships for 2016 will not be part of the ITU World Championship Grand Final in Cozumel.

They will be in Rotterdam (as a test event for the WTS Grand Final and World Champs in 2017).  Cozumel is on at a similar time to the Paralympic Games, so an alternative had to be found.

An athlete’s three best scores are counted for the list and the highest points were available at 2015 World Championships (winner 700 points), second highest points are available at the Continental Championships (for Australia, Devonport – winner 450 points) and then all the WPE within the qualification period are the other qualifying races (worth 300 points to the winner).

In addition to the automatic slot qualification there will be invitations from the ITU for specific athletes. Just under one third of the final field will be filled by invitation.  Invitations will be advised on July 8th.

The WPE will have races in all PT1 to PT5 ITU classes with a total of 10 ‘medal’ events. Athletes are classified according to their activity limitation and impairment.

PT1 – Wheelchair users. Athletes must use a recumbent handcycle on the bike course and a racing wheelchair on the run segment.

PT2/ PT3 /PT4/ – Includes athletes with comparable activity limitation and an impairment of, but not limited to, limb deficiency, hypertonia, ataxia and or athetosis, impaired muscle power or range of movement assessed through classification process. In both bike and run segments, amputee athletes may use approved prosthesis or other supportive devices.

PT5 – Total or partial visual Impairment (sub-classes B1, B2, and B3). A guide from the same nationality and gender is mandatory throughout the race. Must ride a tandem during the bike segment.