Australia’s Legs, Trunk and Arms Mixed Coxed Four (LTAMix4+) moved a step closer to qualifying for the 2016 Rio Paralympic Games last night after the crew won its heat and progressed straight to Saturday’s A-Final at the 2016 Final Paralympic Qualification Regatta. 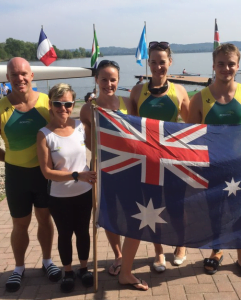 The crew of Brock Ingram, Jeremy McGrath, Davinia Lefroy, Kate Murdoch and coxswain Jo Burnand are currently competing in Gavirate, Italy at the regatta and must finish top two in Saturday’s final to secure Australia a third boat for the rowing section of the Australian Paralympic Team.

Lining up in Lane 2, Australia took on Belarus, Japan, China and Russia in the second heat on what was a warm and pleasant day in Gavirate, with only a slight cross tail for the crews to contend with. Australia had a good start and led the race from the 100 metre mark and continued to maintain their pace and momentum to take first place and secure the fastest qualifying time of the two heats, a fitting gift for Jeremy McGrath who was celebrating his 22nd birthday.

The crew were no doubt buoyed by the Australian support from the grandstand, with a strong and vocal group of staff from the AIS European Training Centre coming out to support Australia. The crew and their coach, Tara Huntly, are currently based at the AIS ETC.

Joining the Australians in automatically qualifying for Saturday’s final was China, along with Brazil and Israel from Heat One.

Coxswain Jo Burnand said: “As a crew, we were happy with our first International race together, for some (Davinia and Brock) it was their international rowing debut. We went out and executed our race plan, with the focus in our boat.

“Today we took an important step toward Paralympic Qualification but now it’s time to prepare for the final and with only two places left for Rio, we are expecting a tough day at the office when we race on Saturday.”