Kurt Fearnley has finished third in the Boston Marathon behind winner Marcel Hug of Switzerland. 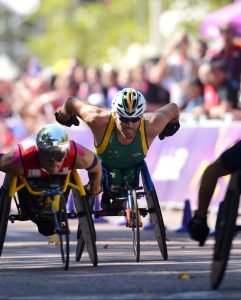 Hug out-sprinted Fearnley and South African Ernst van Dyke over the closing metres of the race, winning in a time of 1 hour 24 minutes 1 second.

Despite the narrow loss, Fearnley was happy with his performance.

“To finish on the podium here is a good result”, Fearnley said.

“It’s the first of the Marathon Majors and probably the toughest course for me so I’m happy to get some good points early in the series.

“Ernie (van Dyke) is a beast around this course and has won here 10 times and Marcel is the first to win back-to-back majors in a few years so third behind these two is no disgrace.”

“One week is a tight turn around and I’m not getting any younger so it’ll be another tough hit out.

“But it’s the same for everyone. All the guys will be backing up and I’ve just got to recover well over the next few days and go again.”

Fearnley will be aiming for his third London win having won the race in 2009 and 2013. Hug and Van Dyke will both provide stiff competition as well as hometown favourite David Weir who finished fourth in Boston.

“London is a different course to this one, a lot flatter with plenty of turns. It won’t be a race in four, there’s a dozen blokes who could win next week and hopefully I can be there at the final bend and have another shot at a win.”