Kurt Fearnley has finished second in the London Marathon improving on his third place in last week’s Boston Marathon. 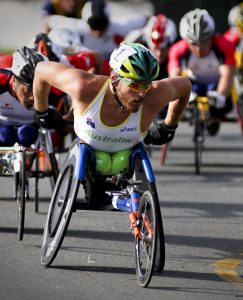 Fearnley rounded the final corner in a pack of seven racers, before sprinting home to finish narrowly behind Marcel Hug of Switzerland.

“Two marathons in a week is something else. It’s nice to improve on last week’s result but of course disappointing not to get the win”, Fearnley said.

“Two from two for Huggy is an incredible effort, full credit to him. He controlled the pace for a lot of the race and is definitely the man to watch heading into the Rio Paralympics.”

Despite finishing without a win for his fortnight of racing, Fearnley was happy with his early season form.

“Three marathons so far this year and I’ve had a win, a second and a third which I’ve got to be pleased with,” Fearnley said.

“I’ve got four more months to get ready for Rio and will spend every moment I have trying to get faster and stronger.”

“In the end we’re all trying to peak in September not April and that’s the target.”