Aussies in action at Waregem CPEDI3* 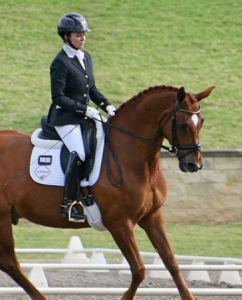 Nikki Doogue posted a solid score of 68.786% in the Grade 4 test to place 2nd in the Team test.  There were a couple of mistakes in the Individual Championship on day two, however Doogue made a comeback to be in 4th position in the Freestyle on the final day.

Katie Umback was consistent across the three days, placing 4th in the Individual Championship and also 4th in the Freestyle.

Chelsea Higgins was 6th in the Individual Championship but missed out on a start in the Freestyle, as did Amelia White who was 12th in the Team test scoring 60.833%.

Joann Formosa, on a borrowed horse, did a credible job coming mid-field in Grade 1B events.

National Performance Director Julia Battams attended the event. “It was good to see the riders improving their performances from Deauville two weeks earlier,” she said. “Now the focus turns to the final qualifying events toward the end of May.”

Following Waregem the last two qualifying events are Mannheim (GER) from 5-7 May and Roosendaal (NED) 19-21 May with team nomination set for 27 May.