The Australian Para-cycling team claimed three medals on day one of the 2016 Para-cycling Track World Championships in Montichiari, Thursday. 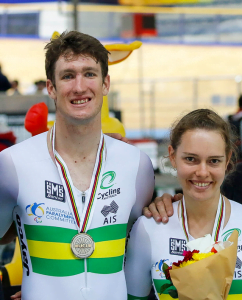 2012 Paralympic gold medallist on the road David Nicholas (QLD) posted the second fastest time in qualifying 3mins 35.184secs to set up a ride against the United States’ Joseph Berenyi.

Little separated the pair in the final, with Berenyi (3:35.569) just pipping Nicholas (3:36.371) by less than one second over the three kilometre distance.

“It is always great to start competition with a medal, seeing this time last year I was in hospital with pneumonia it is a good sign,” said Nicholas.

“We always knew it was going to be tight between us two in the final, so basically I just went out like I did in the qualifying, but just harder in the first kilo then brought it home like my qualifying splits.

“I just gave everything.”

There won’t be much rest for Nicholas in Italy, with the Queenslander now turning his focus to the kilo, scratch race heats and Team Sprint.

Reigning track and road world champion Alistair Donohoe (VIC) claimed bronze in the men’s C5 1km time trial. It was Donohoe’s third consecutive medal in the event having claimed bronze in 2014 in Aguascalientes and silver last year in Apeldoorn.

Donohoe flew around the four laps of the track stopping the clock in 1min 5.629 secs, recording the fastest final lap of the competition.

Donohoe now turns his attention to the 4km individual pursuit, an event he claimed silver in last year as well as the defence of his scratch race title. Both events will be held on Saturday.

In the final, Kennedy clocked 4mins 15.616secs just edging Whitemore (4:15.903) by half a second to climb onto the podium and grab her third straight bronze in the event.

In the same event Alex Lisney (NSW), a medallist at the 2012 Paralympic Games, posted a time of 42.486secs finishing seventh.

Kyle Bridgwood (QLD-1:09.070) finished fifth in the men’s C4 1km time trial, missing the podium by less than half a second in his first track world championships.

Photo with thanks to Cycling Australia