Michael Gallagher (VIC) defended his world title on Saturday as part of a six medal haul by Team Australia on the penultimate day of racing at the 2016 Para-cycling Track World Championships in Montichiari, Italy. 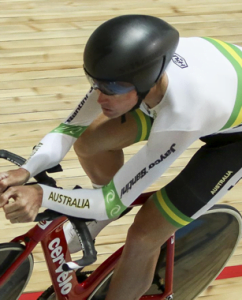 Reigning world champion and dual Paralympic gold medallist Michael Gallagher (VIC) claimed his eighth world title in the individual pursuit in a repeat of last year’s final in a nail-biting finish over teammate Alistair Donohoe (VIC) in the C5 category.

At their first world championships Jessica Gallagher (VIC) and Madison Janssen (QLD) impressed with a bronze medal in the tandem time trial.

Having qualified fastest Donohoe went out fast in the final, though the two were evenly matched over the opening two kilometres with only a tenth of a second between the two close friends.

Donohoe upped the pace in the third kilometre opening an advantage of one and a half seconds as they entered the final four laps.

In a thrilling final Gallagher used his experience showing why he has two Paralympic titles to come over the top of the younger Donohoe to snatch gold by less than one tenth of a second.

Second fastest qualifier Powell and Shawn Morelli (United States) were closely matched over the first kilometre with just one tenth of second separating them.

Over the final two kilometres Powell was edged in to the silver medal position stopping the clock in 3mins 59.279secs. The silver medal was Powell’s fifth in the event from the last five world championships.

“The girls just keep getting faster so really happy to get into the final,” said Powell. “Obviously winning is the ultimate aim, but I was really happy to put out sea-level PB in qualifying and to go faster again in the final was encouraging.

The result and level of competition has Powell excited and motivated ahead of the road to Rio Paralympics in September.

“Working towards Rio it is exciting to be improving. The bar has been raised to a new level with a great ride by USA to set a new world record.

“I see it as a challenge that will help motivate me through the hard yards to Rio.”

Alexandra Lisney made it two Australian’s on the podium as she posted a 4mins 4.491secs to claim the bronze medal. While Hannah Macdougall (VIC-4:14.772) finished in eighth.

After qualifying second fastest Bridgwood set up a ride for gold against Jozef Metelka (Slovakia) who proved too strong in the final for Bridgwood in his first major competition on the track.

In their world championship debut Jessica Gallagher (VIC) and Madison Janssen (QLD) claimed bronze in the tandem one kilometre time trial, stopping the clock after the four laps of the track in 1min 7.575secs.

The seventh of 14 teams to start Gallagher and Janssen set the benchmark with only the final two teams of the Netherlands (1:06.095) and Great Britain (1:07.483) able to set a faster time.

“After only starting together as a team in August last year we have come a long way in such a short period of time,” explained Gallagher. “We know we have so much more improvement ahead of us so it’s exciting knowing we are already up there with the world’s best.

“For me personally I trained up until July 2015 on my own not knowing if I would find a pilot to help me accomplish my dream of representing Australia as a cyclist so to find Maddie and have her commit as much as she has I’m incredibly grateful for.

“Every day we are getting stronger and I can’t wait to see how fast we can become as a team.”

Janssen was equally pleased with their performance. “We are over the moon with the time, given it is a two second PB from Nationals in December.”

Gallagher and Janssen will now turn their attention to the tandem sprint on Sunday.

It was a quick turnaround for Australia’s pursuit medallists with Sue Powell and Alex Green finishing seventh and tenth respectively in the C4-5 scratch race.

In the men’s C4-5 scratch race heats Alistair Donohoe won his heat, while Michael Gallagher finished second and Kyle Bridgwood sixth in the other, with the final being held Sunday.

Photos with thanks to Cycling Australia