The friendly rivalry between Michael Gallagher and Alistair Donohoe has created some exciting racing both on the national and international stage between the two C5 riders. 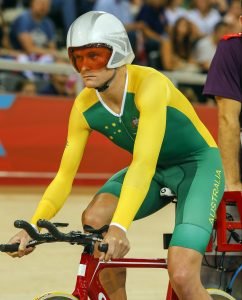 With Gallagher (individual pursuit) and Donohoe (scratch) both heading in to the 2016 UCI Para-cycling Track World Championships as defending champions the exciting racing is set to continue as they again face the best in the world.

“I think the competition between me and Micky pushes us both further and further upwards so it’s beneficial for sure,” said Donohoe. “It’s definitely a healthy competitiveness though, I would be as happy to see him win as winning myself.”

The comments were echoed by Gallagher. “The competition between me and Alistair has been great for both of us. I would like to think that I have assisted in his progression to some point.

“I was the benchmark in Australian para-cycling when he first got involved. It’s been great to see how far he has come, lifting the bar not only in para-cycling but in his quest for results in elite able body races.

“I think it has also kept me at my best for longer to compete with someone of his ability.”

Donohoe is quick to discount any rivalry between the two friends who are both happy to see the other succeed. “Most people probably think there’s a bit of a rivalry but we just want to see an Aussie win!

“I’ve been able to learn a lot from Mick’s experiences since I started racing with him, not only in Para-cycling but he’s also taught me a lot about how to be a better cyclist in general and how to train like a hard man,” Donohoe continued.

“Also the dynamics of the C5 race where you don’t have many teams but each rider is as strong as the next, it helped in the beginning having him there to point out the dangerous moves and also when to go.”

Gallagher has been a stalwart of the Australian team for the past 10 years achieving success both on the track and the road at the highest level including Paralympic Games gold in 2008 and 2012 in the individual pursuit.

“I’m not sure if I’m a leader, being one of the more experienced riders on the team, I possibly could be considered a role model as to how I go about things.

“I’ve been doing it a while so things come pretty natural to me even competing at the bigger events.

“If any of the new members learn anything from me that’s great but we all can learn from each other really,” explained a modest Gallagher.

It has been a busy lead up for both riders as they have combined their talents across the Para-cycling Track and Road National Championships between December and February, as both riders head in to the championships pleased with their preparation.

“My build up has been great. I’ve had a solid summer of racing in Melbourne and my power numbers leading into and including road nationals are the best I’ve had possibly ever,” revealed Gallagher.

“With it being a Paralympic year I think it’s necessary to up the focus and intensity. Spots for the team for Rio are really competitive and I want a spot on the team.

“I think a top two here at the world champs will get me a spot, so that is the goal for these games. I may have to ride a sea level PB to do so, but I think I have the form.”

The younger Donohoe is also pleased with his early 2016 as she enters his first Olympic year. “I probably couldn’t have asked for a much better prep leading into this Worlds,” explained Donohoe who in addition to his Para-cycling racing has also competed in a number of able bodied events.

“My start of the year has been filled with quality racing from U23 nationals to Cadel Evans Great Ocean Road Race and Herald Sun Tour.

“So there is a solid base in the legs I just had to take a week to freshen up and start some track work before heading over here.”

Gallagher hopes to be on the plane for his third Paralympic Games and despite being well in to his third campaign is not showing any signs of slowing down.

“I love cycling and when you can ride your bike for Australia, meet many amazing people, travel to some great places and still be competitive! You do so for as long as you can.

“If life gets in the way or you loose the motivation for it, it may be time to give it away. I have been lucky to have a supportive wife and been able to fit the amount of time and dedication the sport needs into our lifestyle.

“So hopefully I do get to race at the highest level this year with my third games and see what happens after that.”