Susan Seipel has gained a lot of confidence since medalling at the World Championships in Milan last year and it is showing in her paddling after winning her fourth gold of the Oceania Championships in Adelaide today. 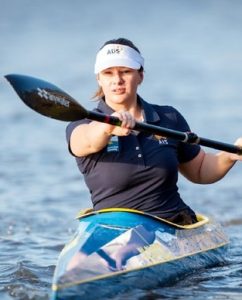 The Brisbane Canoe Club paddler has her sights set on Rio and is within one more race win of securing Paralympic nomination after she won the K1 200 KL2 title yesterday, which doubled as the first selection trial.

Seipel recorded a time of 56.77 to finish 4.07 seconds behind Amanda Reynolds, who also moved a step closer to Rio with victory in the KL3 class.

“I have been working really hard on getting a good start because obviously it is really important in a 200-metre race so that went really well and it is good to get out and have more practice with start gates as we do not have any, where we train so it was good,” Seipel said.

Seipel enters this year full of confidence after a breakout year in 2015 saw her win gold in the VL2 V1 200 and bronze in the KL2 K1 200 finals at the ICF World Championships in Milan.

“I have gained a lot of confidence from having such great results in Milan at Worlds and gained a lot more support through Australian Canoeing,” Seipel said.

“It was just good to get out and see where you stand in the world and especially coming up to a Paralympic year this year, so it is really exciting and I think the whole team did really well to come out on top of the medal tally so that has given us heaps of confidence going forward.”

The experience she gained racing internationally has also given her more confidence at domestic level too.

“You do feel more confident when you come to local races, you know what you are doing and people kind of look up to you because you are a bit more experienced so it’s really good and nice to come home because you know everyone and it’s a really good environment to be around.”

Seipel has a simple goal for 2016, going faster and she plans to achieve this by training a lot more and building up her strength in the gym.

“We get great support with Australian Canoeing so it is going really well and having a team that has done so well at international level, we can all train together and improve the standard and we are getting a lot of interest in paracanoeing in Australia so there are new people coming along and we are really well placed moving forward into this year,” Seipel said.

Seipel is excited for what lies ahead this year.

“It’s going to be a big debut for the sport at the Paralympics and it is pretty much the first Paralympics for everyone in the team so it’s really exciting and we are all looking forward to it.”

Seipel will contest the 1000 metre events tomorrow. She will then return home to prepare for the National Sprint Championships in Perth from 2 to 6 March.

McGrath also backed up that performance with a victory in the V1 500 multi-class final ahead of Glenn Pyne and Dean Garo.

In the women’s events, Sam Bloom joined Reynolds and Seipel on the winners list with victory in the KL1 class.

In a reflection of the momentum created by last year’s success, a host of new Para-canoe women were also in action today including Breanna Reid, Monika Galovic, Shelley Chaplin, Jocelyn Neumueller and Georgia Inglis.

These women are yet to be classified but produced some encouraging performances at West Lakes.