Two-time Doha 2015 gold medallist Isis Holt (Vic) has made a statement at the IPC Athletics Grand Prix in Canberra (ACT) by smashing her own world record in the women’s T35 cerebral palsy 200m. 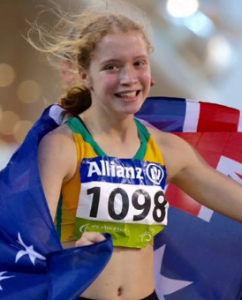 Bettering the time that she ran to win gold at the IPC Athletics World Championships late in 2015, Holt’s time of 28.38 (w: +0.2) sends a commanding message to the para-athletics community ahead of her tilt at 100m and 200m glory at the Rio 2016 Paralympic Games.

“This is completely unexpected. After the 100m yesterday, I had no idea how I would back up so to come away with a time like this is remarkable, really,” Holt said.

“I don’t know what this year will bring but this sets a great benchmark. To do this now makes the prospect of 2016 so exciting. Rio will be amazing regardless, but if I am running quick it will be that little bit better.”

Holt recently commenced Year 9 at Melbourne Girls Grammar School in Melbourne (Vic), with the student, and her support network of her family and her coach Nick Wall, set to balance study with her athletics across the course of the Paralympic year.

“It’s a bit crazy, it’s just so busy, but my school has been great and I’m in a routine now. We’ve managed to balance my homework and everything with the training I need for athletics. It’s going to be a hectic twelve months but I’m really looking forward to it,” Holt added.

In other results at the IPC Athletics Grand Prix: