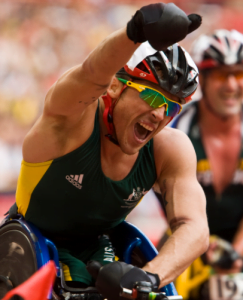 Fearnley finished the race in a time of 1 hour 26 minutes 1 second, sprinting clear of the lead pack of four racers in the last 100m, with Ernst van Dyk of South Africa finishing second.

“It was a brutal race and a tight finish so to hit the tape first in a fast time is a great result,” Fearnley said.

“It’s always nice to get an early win on the board so to be one from one in the marathons this year is a good confidence builder leading up to the Paralympics.”

This year will see Fearnley compete in up to six marathons, with Boston and London in April next, before the big one at the Rio Paralympics where he will attempt to win his third marathon Gold medal.

“Every race and every training session points to Rio this year. It’ll probably be my last Paralympics so I want to make sure I don’t leave anything to chance,”.

“Today is a good start but there’s a lot of kilometres to go before Rio.”