Donohoe takes out Para Performance of the Year

Para-cyclist Alistair Donohoe has been awarded the 2015 AIS Sport Performance Awards (ASPAs) Para Performance of the Year at a gala awards night at Star City in Sydney. 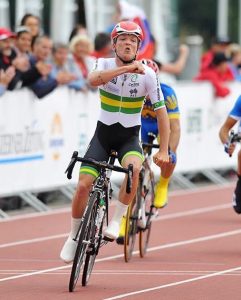 Donohoe who is only 20 years old shone through in a highly competitive field that included wheelchair racer Angie Ballard, Para-swimmer Ellie Cole and Para-rowing pair Kathryn Ross and Gavin Bellis.

Throughout 2015 Donohoe not only excelled in the most competitive classification within Para-cycling, C5, he also greatly contributed to the positive team culture.

He also won the scratch race at the Para-cycling Track World championships, and three gold medals at national track and road events during the year.

About 300 of Australia’s sporting personalities gathered for the second annual ASPAs.