Blade runner Brant in need of a leg up for Rio

Australia’s all-conquering Para-triathlon troops were on show at the Devonport Triathlon today and for one of this year’s Rio Paralympic hopefuls he was just pleased to get through his race “without snapping his blade.” 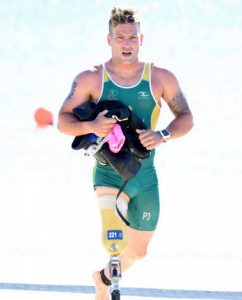 Western Australian Brant Garvey, a 30-year-old congenital above knee amputee won his PT2 category at the Oceania Para-triathlon Championships, but he has been busily patching up his prosthetics as he sets himself for the sport’s debut at this year’s Games.

“The life expectancy for my running blade is two to three years but I’ve reached the two year mark and the carbon fibre is starting to delaminate,” Garvey s said today.

“It then just loses efficiency which means you work harder and go slower.

“Every six months you are looking to replace one part of one leg and you have to find the money through any means possible.

“Through fund raising, sponsors, any way I can, trying to get people to help out where ever possible.

“I am looking to start crowd funding in the very near future to try and raise money for the new blade.”

But Garvey, like all his team mates, wasn’t complaining, just telling a story that most of the Para-triathlon team can relate to as they prepare to do anything to reach their dreams of representing Australia in Rio this year.

They are a hardy lot who dominated last year’s ITU World Para-triathlon Championships in Chicago.

Three weeks ago Garvey “blew out the (mechanical) knee” on the blade and that meant a $6000 cost he didn’t see coming.

“I was doing an interval session, running along the West Coast Highway in Perth flat stick, repeating four-minutes per kilometre and (suddenly) the knee burst, with hydraulic fluid everywhere and I went down,” s aid Garvey.

“The knee is totaled and it had to go back to Germany and we are looking at least four weeks to repair.”

Luckily there was another knee in stock in Perth which “is never the case.”

“I was able to get running straight away but I would like to have the new blade by Penrith…we want to have everything Rio ready by then.”

First across the line today was Australia’s five-time world champion Bill Chaffey, who again showed why he has almost certainly booked his seat on the Rio team with his fellow 2015 ITU World Para-triathlon champion, vision impaired triathlete Katie Kelly.

The pair dominated their categories and with Garvey and PT4 (arm amputee) World Championship bronze medallist Kate Doughty they will all have the first opportunity to further their nominations for Rio when they contest the ITU World Para-triathlon Event in Penrith on April 23 and 24.

Other winners today included Canberra-based Jonathan Goerlach in the vision impaired PT5 men’s division; Josh Kassulke (QLD) who with second placed Jack Swift (VIC) are making a two-pronged attack to make the team for Brasil; Emily Tapp in the non-Paralympic PT1 category who now has her sights on making the team in the 4x400m track team; and two-time PT3 ITU world champion Sally Pilbeam (WA) who has her sights set on a third world title in Rotterdam this year.