The Road to Rio for Australia’s Para-cyclists moves up a gear this week with the 2016 Cycling Australia Para-Cycling Track National Championships in Adelaide. 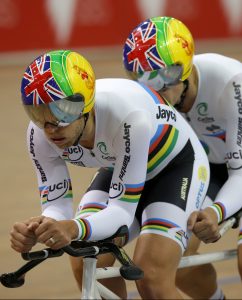 The two-day Championships, to be held on Wednesday 16 and Thursday 17 December at the Adelaide Super-drome, will feature Championships in the individual time trial and pursuit; plus the Tandem time trial, pursuit and sprint.

Already laying claim to one of best para-cyclists Australia has produced, reigning world champion and dual Paralympic gold medallist Michael Gallagher (VIC) will line up in the pursuit. But the veteran is not feeling any pressure ahead of the C5 event.

“I have been world champ for the past 10 years and Paralympics champ since 2008 so the pressure doesn’t really change,” said Gallagher who gunning to compete at a third Paralympic Games.

“I think I always have put pressure on myself to ride well and my goal is to have a good one at the world champs in March and get a spot on the team to Rio.

“I hope to ride well at national more so for my confidence to know I am on track for that.”

At the 2015 Nationals, Gallagher and Victoria’s Alistair Donohoe staged an epic seesawing battle in the individual pursuit, with Gallagher’s younger opponent coming out on top by just one second in that encounter.

However in the World Championship rematch, Gallagher’s experience was just too good for Donohoe as he clinched seventh world title in the event, also by just one second.

“I am expecting Alistair to ride well and he is also probably the favourite to go one better at the world champs this year due to his talent and progression,” Gallagher added. “I think its great that the competition between us keeps us riding fast, but I look forward to trying to stay on top for as long as I can.”

In the women’s events, reigning world champion Sue Powell (ACT) will line up in both the time trial and pursuit events.

The Canberra cyclist is unbeaten on Australian soil in the individual pursuit event but is expecting strong opposition from a quality field which includes 2012 world champion Alexandra Green (NSW) and Victoria’s Hannah Macdougall.

“It is great to see the depth continuing to grow in the sport and in the C4 category with some new faces in quite a few categories this year,” said Powell, who like Gallagher and Donohoe, has staged a number of tough tussles with Green in the pursuit event in the past few years.

“I think it is always a close battle in our category and (in addition to Alex Green) we also have Hannah Macdougall on the improve.

“But my focus is always on my own performance so I find the pressure I put on myself greater than any external expectations.”

And while Powell’s focus is on yet another national title, she also has her eyes firmly set on ten all-important months ahead which includes the World Championships and Paralympic Games.

“These Championships are an important stepping stone with many new and emerging athletes pushing for selection for Worlds and for Rio,” said Powell.

“I’ll be riding both events in Adelaide and it will be good to get some time on the boards and in a race situation, I’m not coming in with too many expectations with my focus firmly on building towards the World Championships in March.”

The Tandem events are shaping up to be the best in history with 2014 pursuit world champions Matt Formston (NSW) & pilot Michael Curran (NSW) featuring in a superb field.

“It is a massive showcase of Aussie tandems. The carrot of Rio has brought the who’s who either back into the mix, or new to the game,” said Curran of the field which includes three-time reigning 4km individual pursuit Paralympic gold medallist Kieran Modra (SA) & Pilot David Edwards (QLD), and 2012 Paralympic Silver medallist Bryce Lindores (QLD) and pilot Mark Jamieson (TAS).

“Although we cannot spend our energy thinking or guessing where the others are at, it still adds that extra element to each session knowing the other bikes will be bringing their A game.

“The healthy competition is only a good thing for Australian cycling, it brings the best out in everyone.”

Formston and Curran are looking to claim their third consecutive pursuit national title, and will line up in defense of their kilometre time trial crown.

“Expectations for the kilo are somewhat relaxed, it’s the pursuit we have been training for,” said Curran. “We always set high expectations on ourselves heading into the Nationals and this year is no different.

“Simply put, Without performing our best at these championships, there will be no Rio; that’s how much of an important stepping stone they are in the grand goal of Rio,” Curran added.

The time trial finals will be held on Thursday from 10am, with the pursuit finals to be decided on Thursday afternoon. Thursday evening will see the sprint finals contested.