The 2016 Sailing World Cup series will officially start today, Wednesday, 9 December, out of Melbourne at its new venue, the St Kilda sailing precinct. 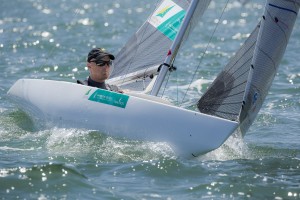 Over 180 sailors from 23 nations across nine Olympic fleets, three Paralympic fleets and an Open Kiteboarding event have arrived in Melbourne and will be aiming to claim the first gold of the series and qualify for the 2016 Abu Dhabi World Cup Final.

The Sailing World Cup Melbourne will showcase Rio Olympic and Paralympic hopefuls as well as a new wave of Australian Sailing talent with 17 Australian Team (AST) and Squad (ASS) crews contesting the event in the Olympic classes and five in the Paralympic classes, including Paralympic gold medallists and recently crowned World Champions Daniel Fitzgibbon (NSW) and Liesl Tesch (NSW).

Other Australian Sailing Team crews will miss the event due to a date collision; Olympic lead-up training and testing requirements at the Copa do Brasil de Vela starting in Rio de Janeiro, Brazil next week.

Melbourne will also see the Australian Sailing Youth Team compete in full force in the Invited Classes as the team prepares for the Youth World Sailing Championships in Malaysia at the end of December (27 December – 3 January).

The Melbourne Sailing World Cup is the Oceania continental-qualifying event for the Rio 2016 Olympic Games with Australia already having qualified all nine boats it was expected to qualify.

Sailing is scheduled to commence at 12:00 local time on Wednesday 9 December and conclude on Sunday 13 December, followed by a prize giving ceremony at the St Kilda foreshore sailing precinct.
In the Paralympic classes London 2012 Gold medallist Paralympians Daniel Fitzgibbon and Liesl Tesch will hit the water in the Skud18 once again after winning the 2015 Para World Sailing Championships last week.

The pair defended their World Championship title after winning the 2015 Para World Sailing Championships on the event’s penultimate day with an unassailable lead and with one day to spare.

The World Championship win completed an unbeaten run for Daniel Fitzgibbon and Liesl Tesch since winning the gold medal at the 2012 Paralympic Games in London.

“Winning the Worlds last week was a good step towards Rio 2016 and we’re on the right track. Obviously we’ve got something there and we just got to keep working and not rest on this and we have more things to work on to get better and better. Rio is such a tricky place we really want to do as much as we can to be dominant there and every racing opportunity we can get is great and we love sailing on Port Phillip,” Dan Fitzgibbon said.

All of Australian Sailing’s Paralympic crews will be contesting the World Cup and nine months out from the Rio 2016 Paralympic Games Australian Sailing Team’s sailors are looking strong after securing three medals at the 2015 Para World Sailing Championships on Port Phillip, Melbourne (28 November – 3 December 2015) and winning the Nation’s Cup as the most successful country for the second time in a row

Australian Sailing’s Sonar Team of Paralympians Colin Harris (WA), Jonathan Harris (NSW) and Russell Boaden (WA) won the silver medal with only one point separating the team from the winning British crew and are looking forward to a rematch at this week’s World Cup racing.

Paralympian Matt Bugg (TAS) took home the bronze in another nail biting final in the 2.4mR class, winning his first World Championship medal and is looking forward for more racing on Port Phillip: “I love sailing in Melbourne. We had some great racing at our World Champs here last week and that’s why I love coming here.”

Racing out of the Royal Yacht Club of Victoria in Williamstown the Paralympic classes will conclude on Saturday, 12 December 2015.