Melbourne put on a great day for the Sailing World Cup’s first races across the nine Olympic and three Paralympic classes on Port Phillip. 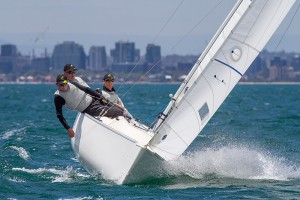 Starting out in 10-12 knots the breeze picked-up quickly, moving into the twenties and making for great and challenging racing across the fleets.

In the Paralympic classes London 2012 Gold medallist Paralympians Daniel Fitzgibbon (NSW) and Liesl Tesch (NSW) hit the water in the SKUD18. After defending their World Championship title at the 2015 Para World Sailing Championships last week the pair continued their winning ways, posting  two solid results; a second and first place in the breezy afternoon race session off Williamstown secured their lead in the SKUD18.

Australian Sailing’s Sonar Team of Paralympians Colin Harris (WA), Jonathan Harris (NSW) and Russell Boaden (WA) won the Para Worlds silver medal with only one point separating the team from the winning British crew and are looking forward to a rematch at this week’s World Cup.

Paralympian Matt Bugg (TAS), who won the bronze medal at last week’s World Championship, is ranked fifth in the 15 boat fleet after posting a seventh and third place on day one. Neil Patterson (TAS) follows in 11th.

All of Australian Sailing’s Paralympic are contesting the World Cup after securing three medals at the 2015 Para World Sailing Championships on Port Phillip, Melbourne (28 November – 3 December 2015) and winning the Nation’s Cup as the most successful country for the second time in a row.