Nine months out from the Rio 2016 Paralympic Games Australian Sailing Team’s sailors are looking strong after securing three medals at the 2015 Para World Sailing Championships on Port Phillip, Melbourne (28 November – 3 December 2015) and winning the Nation’s Cup as the most successful country for the second time in a row. 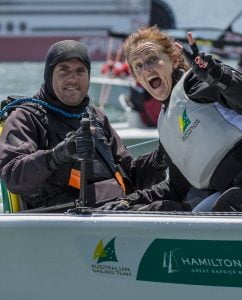 Today, the final day of the event, Australian Sailing’s Sonar Team of Paralympians Colin Harris (WA), Jonathan Harris (NSW) and Russell Boaden (WA) won the silver medal with only one point separating the team from the winning British crew. With this result they moved up one place from their bronze medal last year.

Today they wrapped it all up with another win in the final race, completing a dominant series winning eight out of eleven races. This World Championship win completes an unbeaten run for Daniel Fitzgibbon and Liesl Tesch since winning the gold medal at the 2012 Paralympic Games in London.

Two-Person Keelboat – SKUD-18
Australia’s number one crew in the SKUD18 Daniel Fitzgibbon and Liesl Tesch secured their World title on Wednesday (2 December) with one day to spare and had nothing to lose in today’s final race.

“What can you do, we’re on fire,” Dan Fitzgibbon said with a smile. “That’s how we sail, we want to be dominant and want to prove that we’re a force coming into Rio 2016. We just went out there and did what we do and first place is how the chips fell, which we’re very happy about.”

“Today was awesome. Last year at the Worlds we came last in the last race and had a bit of weed around the rudder, so today we wanted to reverse that trend.”

The pair made the most of having the best of Paralympic sailing to race against on home waters and taking each race as further improvement as they prepare for the Rio 2016 Paralympic Games.

“This is exactly what we wanted to do. We wanted to practice to sail our best race. You never know when you need to sail the best race so we have to practice racing our best, every single time and stay focussed right to the end,” Liesl Tesch said.

And commenting on their impressive series she added: “It’s still a long way to the Paralympic Games in Rio 2016, but I think our series has probably got the other nations a bit worried.”

“It’s also great to see our training partners Ame and Brett do so well. It will be good to have them at our backs as we prepare for Rio. And it’s great to share that adventure with them.“

Fitzgibbon and Tesch have been a mainstay at the top of the podium over the last 12 months after winning the 2014 World Championships in Nova Scotia, Canada in August, followed by gold at Sailing World Cup Melbourne and Miami as well as a win at the Delta Lloyd Regatta in Medemblik, the Netherlands last May.

Their training partners Ame Barnbrook (NSW) and Brett Pearce (NSW) had a strong regatta and finished the event in overall sixth.

“This is a fantastic venue, but we had a few issues in general over the week which affected our scores as a whole. But on the whole, we’ve actually improved vastly and had some good individual results but the overall result doesn’t really show that. We have a few things to work on but we still always keep learning and we are prepared to be training partners for Liesl and Dan,” Ame Barnbrook said.

Three-Person keelboat – Sonar
It was a tough week for Paralympians Colin Harrison, Russell Boaden and Jonathan Harris who were leading for the main part of the regatta before they dropped back into silver position on the penultimate day.

A tight point battle at the top of the leader board meant it all came down to the last race with Australia finishing in third and the winning British crew in fifth and thus Great Britain winning by one point.

“It’s been really tough and tight racing, but we’re very excited to come away with a Silver. The teams really brought their a-game with them and it’s been very tight, as it always is. It’s been a fantastic event and we’ve enjoyed all the racing here at this spectacular venue,” Colin Harrison said.

“Next year will be a big year with Rio 2016 and it’s really important to keep stepping up and trying to improve in all those little areas we can get better in. Without tough competition you never get better and we certainly had that this week.”

The Silver medal continues the successful run of the trio coached by Grant Alderson (WA), who qualified the Sonar last year for the Rio 2016 Paralympic Games after winning the bronze medal at the 2014 IFDS World Championships and have continuously finished on the podium since.

One-Person Keelboat – 2.4mR
Today’s bronze medal win is the first podium win at a World Championship for Tasmanian Matt Bugg. He went into the final race day ranked third and a 14th place was enough to seal the deal in what became a nail-biting final with points close to Britain’s London 2012 gold medallist Helena Lucas in fourth.

“Today didn’t really go to plan. I got myself in a really good position for the start and then I just blew it as I didn’t quite get off the line properly and ended up getting in a really deep spot in the top mark in the 30’s and with Helena almost leading the race. That was exactly what my nightmare was last night. But I managed to come back enough to put only nine boats between Helena and I, which was enough for me to clinch third so I am really happy,” Matt Bugg said about the events of the day.

And excited about his first World Championship podium finish he added: “I have been working to get on the podium for a while. The plan was to come and win, but third I am really happy with as well. Damien (Seguin, FRA) showed that he was just better than everyone this time. But it means improvement from last year (5th) and it’s the first time I have been on the podium in the World Championship so I am really happy with that. “

“I have nine months to work on a few little things, mainly just a lot more sailing and I have full confidence that we can be winning three gold medals in the Paralympic Team come Rio,” he added confidently.

The bronze medal caps off a successful 2015 season for Matt Bugg after he finished fifth in the 2.4mR at last year’s IFDS World Championships and has continuously worked his way up the ranks over the international competitions this season. At the ISAF Sailing World Cup in Hyères Matt Bugg won a silver medal and went on to win bronze at the Delta Lloyd Regatta making it his best European season so far.

Fellow 2.4mR teammate Neil Patterson (TAS) finished the event in 25th, a result he was happy with:

“I‘m pretty happy with the regatta as a whole. I think I have made some massive gains on my speed and my starts. There were a few results that were pretty good, more results around the top 20 than not, so I am really looking forward to the next couple of regattas and hopefully I can do a bit better,” Neil Patterson said.

“I am doing Sail Melbourne and then we have the Open Worlds in Hobart and I’m looking forward to both events, to get back into it and trying to improve on this regatta. But all in all I’m pretty happy.”

All Australian Sailing Team and Squad Paralympic crews will stay on in Williamstown to compete at the ISAF Sailing World Cup Melbourne from mid-next week.

The 2015 Para World Sailing Championships saw 140 sailors from 31 nations compete across three Paralympic events and over six days on Port Phillip, Melbourne, Australia from 28 November to 3 December. It is the largest Paralympic World Sailing Competition in the lead up to the 2016 Rio Paralympic Games.

When A Judoka’s Respect Meant As Much As Gold