The Head Coach of Australia’s Para-Alpine Skiing program, Christian Geiger, has big expectations for the future of the sport. 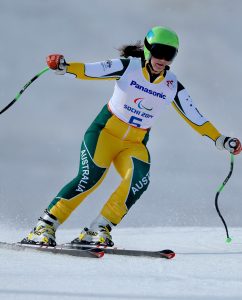 “I hope to see the Paralympic team grow over the next few years, to the point of having a team that’s the most professional Para team in the world,” Geiger said.

“By PyeongChang [2018 Winter Paralympics], I envisage two to three athletes definitely going as medal prospects. For the rest of the team I think Beijing 2022 is a more realistic target for them to perform at their best and hopefully be medal chances.

“I’d like to see a team where the athletes can push each other and hold each other accountable for performance and effort. I’d love to see an environment of excellence with a sustainable and competitive developmental pathway.”

Geiger was himself a talented skier until he suffered major injuries from a car crash in 2009.

The Paralympics offered a way back into the sport for Geiger and he guided Jessica Gallagher to bronze in the Giant Slalom at the Sochi 2014 Winter Paralympics. Now Geiger is heading up the Para-Alpine high performance program, describing it as the best job he’s ever had.

“The transition into coaching has been pretty good,” he said. “I enjoy the coaching side of things as I am able to help more athletes. Trying to compete with teams whose budgets are a lot bigger than ours while having to spend five months of the year away from home can spread our resources and be challenging.

“For all the challenges, working with the team is fantastic, I love seeing them succeed and achieve their goals. They work incredibly hard and make me proud to be coaching them.”

One of the keys to the future of Australia’s Para-Alpine success is a focus on development, with a dynamic emerging athletes’ program.

The development athletes will forge their way under the guidance of coach Chris McKnight and coordinator Michael Milton.

McKnight moved from coaching able-bodied skiers into the Para-Alpine development program in November 2015.

“The transition has felt seamless and I have found no real difference to working with the able-bodied athletes,” McKnight said. “Their desire to perform and achieve excellence is incredible and actually kind of contagious and makes me want to work harder!”

McKnight brings experience, qualification and an expectation of excellence from the athletes both on and off snow. Hi also brings the ability to provide the athletes with training scenarios to assist in achieving both short and long term goals as well as a strong focus on the physical conditioning side of the sport that is required to succeed.

“My hopes and expectations are to focus on strong skiing fundamentals to create a strong athletic position that would allow for these athletes to be able to push themselves in training and racing and achieving results,” McKnight said.

“I was heavily involved with coaching at the Sochi 2014 Paralympics,” Milton said. “But coaching was always part of my life whilst I was competing too – it was a way of staying on snow.”

The emerging athletes are exciting and challenging for Milton, working with athletes with a range of experience and different disabilities.

With Paralympic sport, developing athletes range in age as they may have acquired their disability later in life, or transitioned from other sports.

“It’s unique,” Milton said. “You can have a development athlete in their twenties who is a mature athlete and really able to support the younger ones. And likewise, you can have a younger athlete who has had much more time in the sport than the older ones and can be a role model. Everyone has different things to offer.”

Competing since 1984, Milton has seen massive changes in the sport and predicts many more to come.

“The biggest change is the level of support for the athletes which impacts positively on performance,” Milton said.

“There has been a gradual evolution in how the sport is perceived by the public. I expect that there will be a huge explosion in media coverage after the Rio 2016 Paralympics with Australia having commercial TV rights for the first time. I look forward to that momentum carrying through to the Winter Paralympics in 2018.”