Australia’s Indigneous Paralympians have today been honoured with the unveiling of a plaque at the National Centre of Indigenous Excellence in Sydney, ahead of International Day of People with a Disability on Thursday, 3 December. 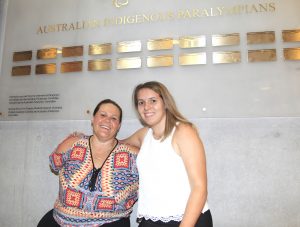 Hosted by the Australian Paralympic Committee (APC), the First Peoples Disability Network (FPDN) and the Outback Academy, the celebration acknowledged the exceptional achievements of the 11 Australian Paralympians who have so far come forward to recognise their Indigneous heritage, with the new plaque sitting alongside an already existing one that recognises Indigenous Olympians.

Tracy Barrell OAM, two-time Paralympic Gold medallist (1992) and First Peoples Disability Network spokesperson said: “ It has been a great honour to participate in this project and to have the opportunity to highlight the achievements of First Peoples with disability.”

“It is particularly important to recognise International Day of People with Disability with a cultural celebration at an Indigenous facility. Connecting with our communities is an important part of FPDN’s work.”

Australian Paralympic Committee Chief Executive Officer Lynne Anderson said: “The APC is proud to support this project which recognises the valuable contribution of Australian Indigenous athletes to Paralympic sport and Australia’s success at the Paralympic Games throughout our history.

“The APC aims to not only formally recognise the Indigenous athletes who have reached the pinnacle of their sport, but to inspire more emerging Indigenous athletes with a disability to pursue sport and enjoy the physical and social benefits that Paralympic sport can provide.”

“Looking ahead, we hope that there are, not only many more Indigenous Paralympians to come, but there are also Indigneous Paralympians from past Games, who will make the personal choice to acknowledge their heritage publicly. We will see to it that they too, are recognised.”