The 2015/16 Para-snowboarding and Alpine Skiing seasons are underway and Australia’s leading athletes are looking for podium results and personal bests. 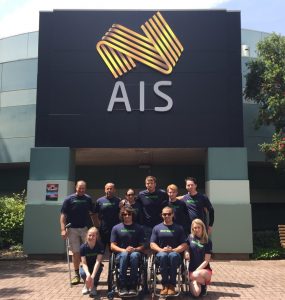 Snowboarder Joany Badenhorst kicked off her season in style with a silver medal at the first World Cup in Landgraaf, The Netherlands.

The 21-year-old who lost her left leg below the knee in a tractor accident, competes in both the Snowboard Cross and Banked Slalom disciplines and is looking for opportunity and improvements as she launches into the season.

“This Northern Hemisphere season is all about finding my feet on snow again,” Badenhorst said.

“I am coming back from injury so I just want to spend as much time on snow as possible so that I can be ready for the World Cup competitions to follow. I have so much to learn and so much opportunity for growth – I just want to make sure that I don’t take it for granted.”

Badenhorst’s Paralympic debut in 2014 was ended by injury but the tenacious athlete defied the odds to get back on snow at the start of this year and win silver at the World Championships.

“After my injury at Sochi I knew that I had a long and tough road ahead of me so I took time of training and a step back from University to make sure that I spent the maximum amount of time doing my rehab as well as building up my strength to prevent it from happening again,” she said.

“Competing, never the less podiuming and winning silver at the World Champs this year came as a complete shock to me. I didn’t think I would be able to start, let alone be a true competitor! I was over the moon to know that regardless of my injury I could still put my best foot forward and have something to show for the all the hard work we put in throughout the season.”

Joining Badenhorst on the World Cup circuit will be young-gun Ben Tudhope who made history as the youngest athlete at the Sochi 2014 Paralympics; and Simon Patmore who won track and field medals in sprinting at both the London 2012 Paralympics and the Delhi 2010 Commonwealth Games.

The trio’s next World Cup hit-out will be in February in Big White, Canada, before moving on to Spain, France and the finals in Italy.

The first Para Alpine World Cup of the season will take place in Abtenau, Austria in January with Geelong’s Mitch Gourley leading the way.

The 24-year-old dual Paralympian is aiming for podium finishes this season.

“Last year’s Worlds Championships were tough for me with three very near misses,” Gourley said.

“However I feel like I’ve had a really good summer in the gym and on the hill and am ready to get back on the World Cup podium regularly and fight for the Giant Slalom globe and the Overall title again. Those are the big goals for this World Cup season.

Gourley, who has been skiing since he was 11 and competing for Australia since 15, said he is also looking to improve his skills across the range of alpine disciplines.

“I’ve always been strong in Giant Slalom, but I’d really like to become a more consistent performer at World Cup level in the speed disciplines. I’d love to snag a World Cup podium in Downhill this year. It’d be nice to tick that box and have World Cup podiums in all five events.”

Australia’s Para Alpine Skiing development squad also have an exciting season ahead. The athletes are currently in Panorama, Canada, where Shaun Pianta grabbed Slalom silver in his first International Paralympic Committee Alpine Skiing (IPCAS) event after being internationally classified as a B3 Visually Impaired skier. Pianta will now head to Winterpark in the USA alongside Patrick Jensen and Jonty O’Callaghan for the second IPCAS event of the season.

The team is in safe hands with coach Michael Milton leading the way. Milton, a five-time Winter Paralympian forged the path for Para Alpine Skiing success in Australia, winning 11 Paralympic medals throughout his illustrious career.