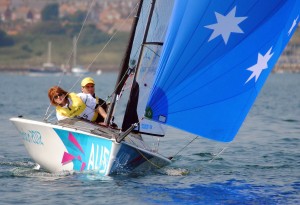 Port Phillip welcomed the sailors with a lighter breeze that started out around eight knots and built to 16 for the fleets racing in the afternoon.

“It was tough to dig deep and find the energy after such a tough first day on the race course yesterday. We knewwe had to dig deep and Dan and I found what we needed to finish the day with two wins,” Liesl Tesch said.

It’s been an intense two weeks for Australian Sailing’s Paralympic sailors with the 2015 Para World Sailing Championships only wrapping up on Thursday last week.

Australian Sailing’s Sonar Team of Paralympians Colin Harrison (WA), Jonathan Harris (NSW) and Russell Boaden (WA) won the silver medal last week and after starting out with a third and second place in yesterday’s racing, the team was back to its winning form, two race wins securing them the overall lead.

“It was a much more stable racetrack and the racing was really enjoyable, especially with a couple of race wins. The crew is feeling really positive two days into the regatta,” skipper Colin Harrison said.

“We’re expecting a lot of wind tomorrow so we’re not sure how that’s going to pan out. With only two days left we’ll just have to take every opportunity to get out there and race.”

All of Australian Sailing’s Paralympic are contesting the World Cup after securing three medals at the 2015 Para World Sailing Championships (28 November – 3 December 2015) in Melbourne last week.