In the afterglow of Australia’s 22-medal haul at Doha 2015, the International Paralympic Committee has confirmed that Canberra (ACT) will host the opening leg of the IPC Athletics Grand Prix Series on 5-7 February 2016. 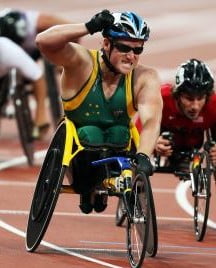 Coinciding with the 2016 ACT Athletics Championships to deliver a bumper weekend of track and field in the nation’s capital, the confirmation of the event ensures a return of world-class Para-athletics to our shores after Brisbane (Qld) played host in 2015.

“This is an outstanding opportunity for Australia’s best para-athletes, Athletics ACT and fans of the sport in Canberra,” Phil Jones, the Athletics Australia Chief Executive Officer, said.

“The Australian Institute of Sport and its facilities provide an ideal environment for the hosting of such a prestigious event leading up to the Rio 2016 Paralympic Games and we look forward to working with our partners in the region to ensure the best possible competition opportunity for para-athletes from Australia and around the world.”

“The ACT Athletics Championships are the pinnacle event of our season. To include a para-athletics event of this standard in the program is an outstanding development for athletics in the region,” Boden said.

“We are grateful to the International Paralympic Committee for entrusting this event to us and we will work tirelessly to ensure the best possible environment for para-athletes to perform at their best.”

Ryan Montgomery, the Director of Summer Sport for the International Paralympic Committee, applauded Australia for their continued efforts to host para-athletics events and looks forward to seeing an IPC Athletics Grand Prix in Australia in 2016.

“The IPC Athletics Grand Prix Series, which is proudly presented in association with Allianz, provides the highest level of competition for the world’s best para-athletes and we are proud to extend the offer of hosting the opening leg of the event next year to Canberra,” Montgomery said.

“The event was a great success in Brisbane this year. We are confident that Athletics Australia and its member association in the ACT will host another outstanding display of para-athletics once more as we look forward to working with them as Rio 2016 approaches.”

The 2016 IPC Athletics Grand Prix series will feature 10 meetings and, with the addition of Oceania in 2015, will ensure that a major para-athletics meeting will be held on all five continents ahead of the Rio 2016 Paralympic Games.