Cadbury has today announced it will become a Major Partner of the 2016 Australian Paralympic Team, as the brand seeks to bring joy to the nation through Australia’s Paralympic athletes who are currently preparing to compete in one of the world’s biggest sporting events, the Rio 2016 Paralympic Games. 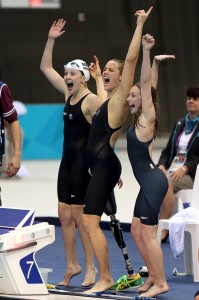 The partnership is designed to shine a spotlight on Paralympic sport and provide a platform for the Australian Paralympic Team’s inspiring athletes to showcase their spirit and determination to Australians across the country.

As part of the sponsorship, Cadbury will create content that will enable Australians to support the Paralympic athletes as they embark on their incredible journey to the Rio 2016 Paralympic Games.

In February 2016, Cadbury will kick off an activation to celebrate the Australian Team’s journey to the Paralympic Games, which will take place in September 2016. The activation is designed to ignite excitement building up to and during the Games. More details will be announced in the coming months.

Cadbury’s association with the Australian Paralympic Team follows last month’s announcement of Cadbury’s partnership with the Australian Olympic Team. Through their overarching ‘Bring on the Joy’ campaign, Cadbury will rally Australians to throw their support behind all athletes who will represent the nation in Rio 2016. In the build-up to the Paralympic Games, Cadbury will bring to life the joyful moments that Australians can experience alongside its athletes on the road to Rio and at the event, in 2016.

Lauren Fildes, Head of Strategic Partnerships and Events at Cadbury, said: “The Australian Paralympic Team is made up of a group of remarkably high-performing athletes who inspire and excite all Australians. We want to empower all athletes in their quest for success. Regardless of their abilities or disabilities, all of our athletes in Rio have the ability to ‘Bring on the Joy’ and we are immensely proud to support both teams and help free the joy that they will undoubtedly bring to the nation through their accomplishments.”

To have a Major Partner like Cadbury on board that so many Australians connect with is an honour and yet another great step forward for the Paralympic movement. The journey to Rio will be such an exciting one, and we’re proud that Cadbury will be alongside us all the way.”

The Australian Paralympic Committee is currently preparing to send an Australian Team of more than 170 athletes from every Australian state and territory to compete in up to 17 sports at the Rio 2016 Paralympic Games.