22 medals for the Australian Flame at Doha 2015

The IPC Athletics World Championships have drawn to an exciting close in Doha (QAT), with the 48-strong Australian Flame team set to return home with an impressive medal haul of eight gold, four silver and ten bronze. 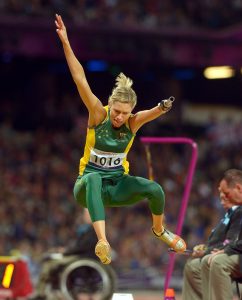 Applauding the efforts of his green and gold charges, Athletics Australia Paralympic Program Manager, Andrew Faichney, is confident that performances here set the tone for a strong campaign at the Rio 2016 Paralympic Games.

“This has been a remarkable championships both on and off the track. Our athletes have achieved great success, highlighted by our 22 medals, including eight gold, and the processes we have established in our village environment will allow for a seamless build toward further great outcomes at the Paralympic Games,” Faichney said.

“We have seen great performances by both our experienced athletes including Angela Ballard and Scott Reardon, as well as our rookies, namely world record holder and two-time champion Isis Holt, these past ten days. Paralympic champions Evan O’Hanlon and Richard Colman are also set to return for Rio 2016, highlighting that the team is in a strong position.

“I congratulate all involved here in Doha, from the athletes, their personal coaches and support networks and our team staff. You’ve prepared well and competed admirably. Well done, also, to the host city and the International Paralympic Committee. This has been a great event and highlights the ever-improving delivery of championship events for the world’s best para-athletes.”

In Australian Flame results on the final day of competition at the IPC Athletics World Championships:
–       Rheed McCracken (Qld) clocked a season best of 29.35 (w: +0.5) to place 6th in the T34 wheelchair 200m.
–       A medallist in the long jump, Brayden Davidson (SA) crossed in 26.35 (w: +0.6) to finish 7th in the final of the T36 200m for athletes with cerebral palsy.
–       Crossing the line in the bronze medal position, the women’s T35-38 4x100m relay team of Isis Holt (Vic), Erin Cleaver (NSW), Jodi Elkington-Jones (NSW) and Ella Pardy (WA) were disqualified after an illegal second change.
–        With a season best throw of 40.01m in the last round, Russell Short (Vic) finished 6th in the men’s T12 discus throw for visually impaired athletes. Short has amazingly competed at all IPC Athletics World Championships held, since the first event in 1994.