The Australian Steelers are through to the semi finals of the World Wheelchair Rugby Challenge in London, after rounding off their pool matches with a 66-56 victory over France.

After finishing the first quarter of the game with 20 points and a six point lead, the Steelers were in for a surprise when the French side scored the upper hand in the second quarter. 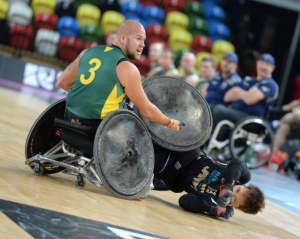 Having never played the European team before, the Steelers battled it out in the final quarter to finish with a ten point win and show why they are ranked number one in the world.

“The win was a pretty good effort given we’ve never played them before. The French team are a different kind of team for us to compete against, they are quite unpredictable to a point,” said Australian head coach Brad Dubberley.

While preparation for the game included watching videos of their past games to study their tactics, Australian strength and conditioning coach Greg Smith admitted they are a team that aren’t given enough credit.

“They’ve got a good range of classifications so they definitely covered us, but the boys played well and we got another win,” he said.

Having tested out different styles of play during the game to ensure they stayed on top, Steelers vice captain Nazim Erdem said, “it was tougher than we thought it would be, but most importantly it was good preparation for tomorrow’s game against the US, the decider in who makes the gold medal match.”

“Overall it was a great game, which set us up well for the semi final against the USA. We haven’t played them in a while but the boys are looking forward to it,” said Smith.

Should the Steelers win the semi final against the USA, they will face either Japan or Canada in the final.

The World Wheelchair Rugby Challenge in London concludes this Saturday.

By APC and WWRC Media