Rollers and Gliders off to a perfect start at AOZ Qualifiers

The Australian men’s and women’s wheelchair teams have both begun their Asia Oceania Zone (AOZ) Paralympic qualifying tournament in style, defeating Chinese Taipei and Japan respectively on the opening day of competition.

With only three spots available from twelve competing teams for the 2016 Paralympics, there is little room for error for the Rollers and they made sure to put Chinese Taipei away early. 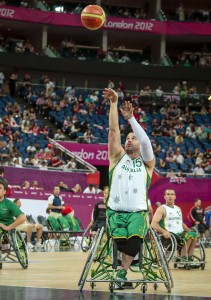 Brett Stibners, Bill Latham and Tristan Knowles set the tone through some hard pushing and clean finishing around the basket to give Australia a 28-9 lead at quarter-time.

They would go on to win every quarter after that as well with captain Brad Ness (10 points) keeping his foot on the throat of Taipei while Tom O-Neill Thorne was instrumental at the defensive end with seven steals to go with 13 points.

With a 54-15 advantage at the main break, the Rollers continued to push through the second half with some big-time shots from Jannik Blair (eight points, two assists) extending the margin as Australia went on to record a convincing 95-26 victory.

The Gliders’ margin of error is even slimmer than the Rollers as only they, Japan or China will advance to the Paralympics next year which made the opening clash between Australia and Japan a critical one.

A nervous start from the Gliders included several missed shots in the paint and a couple of lapses at the defensive end.

However, the combination of Kylie Gauci and Cobi Crispin off the bench brought some pace into the game and the Gliders took the ascendancy to lead by a point at the first change.

Gauci’s passing then allowed Amber Merritt to take control under the rim in the second term while their team defence held the Japanese to single-figures for the quarter.

Their 11-point advantage at half-time was quickly extended to a game-winning margin in the third period as the Australians pushed their lead beyond 20.

This allowed coach Tom Kyle to play all twelve members of his team and although the final score was 53-42, it was not indicative of how dominant the Gliders had been.

Merritt finished with a game-high 18 points, Crispin (13 points) and Gauci (11) also reached double-figures while rookie Georgia Inglis was superb at the defensive end.

The Rollers will next face Iran at 4pm today while the Gliders have a day off before facing China on Monday.