‘The White Tiger’, Chad Perris (WA), has won SILVER in the T13 visually impaired 200m to bolster the trophy cabinet of the Australian Flame at the IPC Athletics World Championships in Doha (QAT). 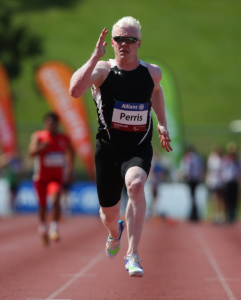 Smashing his own personal best and the national record by almost half a second to cross in a time of 21.82 (w: +1.5), Perris, who has albinism, came home like a steam train to almost snatch gold from Nambala Johannes (NAM, first, 21.74).

The performance adds to the bronze medal he won in the 100m earlier in the program, with the shorter event to remain his focus as the Rio 2016 Paralympic Games fast approach.

“I’m stoked. It’s my second world champs and I’ve improved so much since the last time. To now have a silver medal alongside my bronze is pretty amazing, I’ve worked for it but it still feels a little surreal,” Perris said.

“The plan was to come around the bend strongly and see what I had left. My back end is usually pretty strong so I knew that I would have something to give and to move up to the silver spot is amazing. I’m so happy.

“The 200m isn’t on the program next year, but the 100m has always been my priority. I’ve got more to give and know there is still improvement to be found.”

Perris is based in Canberra (ACT), where he is coached by Iryna Dvoskina. Renowned for her work with sprinters and jumpers, the efforts of Scott Reardon (NSW) and Perris at these IPC Athletics World Championships have ensured that she has now guided Australian athletes to more than 50 medals at major championships.

Fearnley will now turn his attention to the New York Marathon this Sunday 1 November, where he will join training partner Christie Dawes (NSW) in the men’s and women’s wheelchair marathon respectively. Fearnley has a rich history of success at the event, winning on five occasions including last year. Only weeks ago he clocked 1:30:45 to win his 40th marathon in Chicago (USA).

In the field, it was Claire Keefer (Qld) that delivered a podium finish, with the 20-year-old throwing a national record 7.62m to claim BRONZE in the F41 shot put for athletes of short stature.

Debuting in the green and gold at these championships, Keefer’s series also included throws two throws of 7.15m, marks of 7.42m and 7.23m and a foul. The performance sits alongside her fourth place in the discus on day two of competition.

In other results on day five of the IPC Athletics World Championships:

–          Throwing a personal best of 27.05m in the penultimate round, Rae Anderson (NSW), who will also compete in the javelin, placed 7th in the final of the F38 discus throw for athletes with cerebral palsy.