In four weeks time Australia will host the 2015 Para World Sailing Championships, which will be the largest Paralympic Sailing Competition in the lead up to the 2016 Rio Paralympic Games. 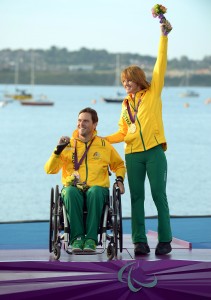 The 2015 Para World Sailing Championships are set to welcome 136 sailors from 31 nations in Melbourne, Australia from 24 November to 3 December 2015.

Racing out of the Royal Yacht Club of Victoria in Williamstown, all of Australian Sailing Team’s and Squad Paralympic boat class sailors will be at the start line and are aiming to defend their 2014 Nation’s Cup win as the team prepares for the 2016 Rio Paralympic Games (7 – 18 September 2016).

The pair has had a strong 2015 season winning all regattas they have competed in and are excited to race their season highlight on home waters.

“It’s absolutely fantastic to have the Worlds Championships here in Australia and it’s quite an honour to have it on beautiful Port Phillip. It will be the chance for Australians to have a look at top level, fantastic racing,” event ambassador Liesl Tesch said.

“Melbourne is one of our favourite waterways in the world and the event will be another great positive step in our Paralympic preparation. And no pressure on us as the defending World Champions…. well, the big target will be on our back after our Paralympic Gold medal first, then 2014 World Champion and our season so far, so watch this space.”

On top of Australia’s Paralympians, Great Britain’s London 2012 Olympic gold medalists Helena Lucas (GBR) will make her way to Australia to race the 2.4mR and other London 2012 medallists making the trip include 2.4mR silver medallist Heiko Kroger (GER) and SKUD18 bronze medalists Alexandra Rickham and Niki Birrell (GBR). Silver and bronze medallists in the Sonar, Jens Kroker, Siegmund Mainka and Robert Prem (GER) and Aleksander Wang-Hansen, Marie Solberg and Per Eugen Kristiansen (NOR) will also be on the start line.

Away from the elite competitors at the front of the fleet the fight will be on for the remaining Rio 2016 spots. Australia already qualified all three Paralympic boat classes at last year’s Para World Sailing World Championships, but the competition will be high with these World Championships offering a total of 35 athletes the opportunity to book their spot in Melbourne for Rio 2016 after the 2014 Championship saw the first 50% of spots snapped up.

Seven spots in the 2.4mR, five in the SKUD18 and six in the Sonar will be up for grabs. Click here for the qualification system – http://www.sailing.org/tools/documents/2016ParalympicsSailingQualificationSystem-%5B16640%5D.pdf

Organising Committee chair Michael McLean said, “31 countries, is a fabulous result and commitment from all countries and sailors and coaches to such a prestigious event in the sailing calendar. It is after all the second and final country qualifier for the Rio Paralympics.”

“We don’t run these events very often,” McLean continued, “so I would encourage all the members of the RYVC, the local population, sailing community and the world of Paralympic sport to get excited by this event, I certainly am.”

“You would really struggle to find a more professional group of sailors and coaches dedicated to representing their countries at the highest level. This will be some of the best sailing you are ever able to witness.”

Registration, measurement and classification will run for three days in Melbourne from 24 November. The Opening Ceremony will take place on 27 November with six days of racing commencing on Saturday 28 November. A single race on Thursday 3 December will bring the regatta to a close followed by the prize giving.