Runner-up in 2013 and 2014, Fearnley was looking to get back on top of the podium and did so in style, finishing in a time of 1 hour 30 minutes 45 seconds, just one second ahead of last year’s winner, Josh George of the United States. 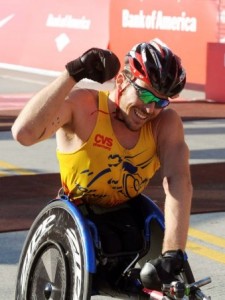 s the 40th marathon win of his career.

“That was a great race”, Fearnley said.

“I spent about 40km of the 42km chasing the wheel of Huggy (Swiss athlete Marcel Hug) but knew the final climb was my chance to pounce. I managed to get my nose in front and hold on until the finish.”

Eleven athletes finished with 12 seconds of Fearnley, an unusually large field for the sprint finish in Chicago.

“Normally there’s only a handful of us turning the final corner into the home straight so to have a dozen blokes there shows the calibre of this year’s field.”

“Josh got one over me here last year so it was nice to pull one back and beat him to the line this year.”

Fearnley’s attention now turns to the IPC World Athletics Championship in Doha, Qatar where he will compete in 1500m and 5000m events, before returning to the United States at the end of the month where he will attempt to defend his New York Marathon title.

“It’s a busy month but I wouldn’t swap it for the world. I’ve got a couple of days breather at home to see the wife and young fella, then off to Qatar, then back into New York. It’s a busy finish to the year but I’ve been working towards it for months so I’m pretty excited.”