Australia’s wheelchair rugby team, the Steelers are hungry to prove their place as the region’s best after winning their first two games of the IWRF Asia Oceania Zonal Championships. 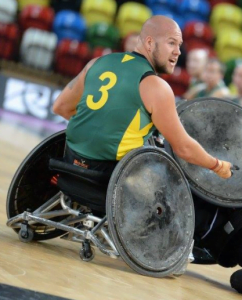 In a stunning effort by the Steelers, the world number three team showed dominance against the Korean side throughout the entire game, finishing with an 80 point lead, 96-16.

While the win against the world number 24 team was expected, the intensity and continued momentum conducted by the team is something that Australian head coach Brad Dubberley is proud of.

“It was a great game in the fact that our guys came out against Korea and weren’t complacent, even after winning the first quarter 28-0,” he said.

“Our defense was great, as was our offense, but the main success for the boys is that they stuck to our plan and pulled off an incredible win.”

After falling two places on the world rankings at the World Wheelchair Rugby Challenge in London earlier this month, the team is working harder than ever to become the best team they can be.

“One great thing about the game was the discipline of the team. It’s the old cliché, go through the right processes and the results take care of themselves,” said Australian strength and conditioning coach Greg Smith.

“It’s easier to get complacent in a game like that and play more at their level than our level, so overall we’re really happy.”

Going into their second game against world number 10  team New Zealand, the Steelers were confident of a win and although they were victorious with a final score of 55-50, the small point score difference showed them there is still much work to be done.

Neck-and-neck throughout the first quarter, New Zealand found themselves with the upper hand at quarter time with a one point lead 13-14.

Although Australia scored a total of 17 goals in the second quarter which gave them the point difference they needed throughout the game, New Zealand showed they can match the likes of the Steelers equaling the 15 points scored in the third quarter and edging out Australia by two in the final quarter.

“The boys were a little less disciplined this time around. We had ten turn overs and two offensive spins which we need to get out of the game, and some passing decisions that probably let us down a bit,” Smith said.

“New Zealand stepped up. Their low pointers have improved. We’ll be playing them again tomorrow, and I think it’s good for us to have to play these guys a few more times and adjust to other team’s strengths,” Dubberley said.

Having already qualified for the Rio 2016 Paralympic Games after taking out the 2014 IWRF World Championships,  Dubberley and Smith are using the opportunity to test their strengths and weaknesses, using different line ups.

Traditionally pairing 3.5 players Ryley Batt and Chris Bond in the starting line up, Dubberley tested new combinations through both Games which proved to be a success.

“I think playing our Ryley and Bondy in that impact line is probably going to work better instead of starting games that way coming into Rio.

“It’s great that everyone got good minutes and we’ll continue testing plays out in the coming days.”

The Steelers will face world number four team Japan at 12pm AEDT and will play New Zealand again at 7pm AEDT. Games can be streamed via www.ustream.tv/channel/6hKUP55KpgL