The Australian Flame boast a third gold medal from the IPC Athletics World Championships after Carlee Beattie (Qld) soared to the top of the podium in the T47 long jump for athletes with arm deficiencies. 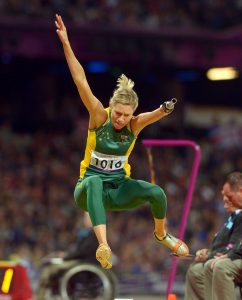 Opening her account with the her winning mark of 5.75m (w: +1.9), which doubled as a season best, the 33-year-old faced an anxious wait for the remaining five rounds before being crowned victorious from Yunidis Carillo (CUB, second, 5.41m) and Anna Grimaldi (NZL, third, 5.41m).

“My aim was to get a big jump out early to put some pressure on the other girls and to do that was awesome. I’m in the best shape that I have ever been in, my preparation for a major championships has been great, and to be honest I didn’t have the best start to the year in Australia so turning it around is fantastic,” Beattie said.

Beattie’s trophy cabinet already boasted the silver medal from the London 2012 Paralympic Games, as well as a silver and bronze medal from the IPC Athletics World Championships in 2013 and 2011 respectively. She is thrilled to make the leap to the gold medal position.

“I’ve always been the bridesmaid and to have this before Rio is such a massive confidence boost. It will give me the drive to keep going, to want it even more and to make sure that I can do the same thing again at the Paralympic Games,” Beattie added.

On track, it was the rising star Deon Kenzie (Tas) and 14-year-old Isis Holt (Vic) who shone.

Kenzie blitzed the field in the first round of the men’s T38 800m for athletes with cerebral palsy, crossing the line with a clear lead in a time of 2:08.46. The performance ensured his automatic progression to the final tomorrow, where he will start the fastest and with the confidence to improve on his bronze medal from Lyon 2013 two years ago.

“I tried to stay as controlled as possible on the first lap, but I was definitely keen to get that automatic qualifier for the final so I put the foot down a bit with 200m to go to see how I went. I felt them sneaking up on me a bit and wanted to test myself,” Kenzie said.

“It was comfortable out there, I’m pretty confident heading into the final tomorrow night.”

Clocking 28.55 (w: +2.4), Holt was unrivalled in her heat of the T35 200m for athletes with cerebral palsy. The first past the post by just shy of ten metres, Holt’s time is faster than her own world record but, as a consequence of the illegal wind, it will not stand.

The Chicago Marathon winner Kurt Fearnley (NSW) took to the track tonight as well, starting in the T54 wheelchair 1500m.

The fifth man to cross in his heat in a time of 3:20.84, Fearnley, who is competing at his fourth IPC Athletics World Championships, did not progress to the final and will shift his attention to longer 5000m in the coming days.

In the heat that followed, his teammate Jake Lappin (Vic) tumbled out of his race chair after a huge collision saw five athletes crash out of the race. The event was re-run later in the program, with Lappin finishing second in 3:04.30 to advance to the final.

In other results for the Australian Flame on day two of the IPC Athletics World Championships:

–       With a best performance of 11.30m in the fourth round, Nicole Harris (NSW) placed 7th in the final of the women’s F20 shot put for athletes with intellectual disabilities.

–       Madison de Rozario (WA) took line honours in her heat of the women’s T54 wheelchair 1500m in 3:59.46 to automatically progress to the final tomorrow. Angela Ballard (NSW), who won a gold medal yesterday, will join her after placing 4th in her heat to move through based on her time.

–       Rheed McCracken (Qld) sailed through his semi-final of the men’s T34 wheelchair 400m, placing third in 56.89 to automatically progress to the round-of-eight.