Australia’s 48-strong team for the IPC Athletics World Championships has arrived in the host city of Doha (QAT), with the countdown continuing to the pinnacle competition for the best para-athletes from across the globe. 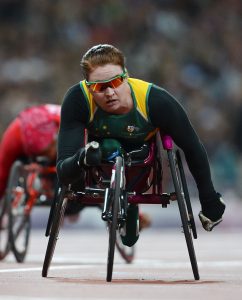 For Angela Ballard (NSW), who won four medals at the event two years ago in Lyon (FRA), her sixth start on the track at the para-athletics world titles highlights her impressive longevity as one of our best ever wheelchair racers.

In fact, the first time that the Glasgow 2014 Commonwealth champion represented the green and gold at the event, much of the nation was still eagerly anticipating hosting the then upcoming Sydney Olympic & Paralympic Games.

Seventeen years and four IPC Athletics World Championships later, Ballard is once again gearing up to race. She will start in the T53 wheelchair 200m, 400m, 800m and 1500m.

“Everything is going well in terms of my preparation for Doha, I’m actually in really good form at the moment and excited to go out and perform well,” Ballard said.

“I think the difference is that now I train smarter, instead of training harder. Everything has a purpose now and if I can’t figure out the purpose of what I’m doing it generally doesn’t stay in my program.”

It’s a recipe for success that has taken many years of determination and hard work to perfect. But above all else, it’s Ballard’s commitment and dedication to improve that has seen her racing reach a world-class level.

“I’ve found perseverance and commitment is really important to achieving what you set out to do. It’s about finding what works for you and respecting the process,” Ballard said.

“I’ve taken a lot of interest over the years about learning what I have to do to improve and about the sport in general, so I can be a part of the solution to success.”

Earlier this year, Ballard cemented herself as the one to beat when she claimed two world records in the T53 wheelchair 400m and 800m in Arbon (SUI). She credits this astounding form to her ‘consistent training’ and perhaps most critically her experience.

“Part of the reason I’m doing a lot better now, is because I’m able to back-up performances in a short period of time. Experience is learning to know what your strengths are and how to use them to your advantage,” Ballard added.

Over many years Ballard has seen her fair share of major competition, and although she admits she does still feel nervous before a big meet, she has learnt to harness that power to her advantage.

“Even now, in competition I’m a complete stress-head, often very anxious and nervous. But through experience I know I have to keep it in the right zone so I can use it to help me perform,” Ballard said.

“I tell myself that Doha will just be another world championships but honestly I’ll probably be just as nervous as I was back when I first started. I still get really nervous for the bigger competitions, but at least now I know how to control it better and use it for my advantage.”

Competition at the IPC Athletics World Championships commences on 22 October 2015, with the Australian Flame team currently preparing for competition in the host city.