Australia’s wheelchair rugby team has proven they are the team to beat at the World Wheelchair Rugby Challenge, winning both their opening games against top teams Japan and Great Britain.

In their return to Copper Box Arena, the same venue at which they won gold at London 2012, the team managed to keep the upper hand on both teams despite facing tough challenges throughout the day.

In their first game against world number four team Japan, the Steelers fought hard to take a 65-62 victory. 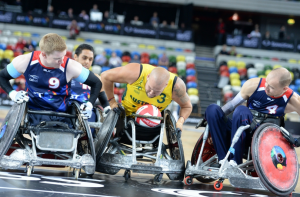 “They’re number four in the world, but they’ve proved they can now challenge anybody,” he continued.

The scores were close throughout the game as Japan went wheel-to-wheel and matched Australia’s score for much of the first half. In the final quarter, Australia briefly held a four-point lead but Japan battled to try and take something from the game, however, Australia held on to their three-point advantage to win the game.

While Australia played a strong game, the small point difference between the two teams shows there is work to be done ahead of the Rio 2016 Paralympic Games next year.

“Their top line up probably has more function than ours, unlike other top teams like the US and Canada, so the game became a different challenge for us today and they’re really narrowing the gap between the world’s top four teams,” said Australian head coach Brad Dubberley.

With only a few hours of rest between their first and second games, the Steelers continued the momentum and battled hard to end European champions Great Britain’s 100% winning start to the tournament after holding onto the lead from early in the first quarter.

“This was a tough game for us, Great Britain had the advantage of a 24 hour break between games, and as it was a home game for them, they were always going to come out very competitive,” said Dubberley.

Although Dubberley says the team struggled from “fatigue issues,” Australia took a three-point lead into the second quarter, to eventually win 57-55.

“We’re not always going to win by five to ten goals, but it was still good to see the boys had the upper hand throughout the game.

In their next game of the series, the Steelers will take on France on Wednesday, 14 October at 10am BST.

By WWRC and APC Media