There has been a mixed result at the AOZ qualifying tournament ahead of the Rio 2016 Paralympic Games, with the Australian Rollers winning the gold medal in the men’s competition while the Gliders have just missed out on a spot in next year’s Paralympic Games with a heartbreaking loss to China. 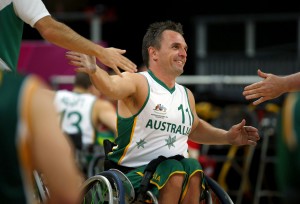 The Rollers officially booked their place in the 2016 Paralympics with a 70-41 win over Japan in the Semi Final.

Winning every quarter, Australia was relentless with their defensive pressure while their speed in transition proved too much for the host nation.

He was ably supported by Brett Stibners (11 points and nine rebounds) while Tom O’Neill-Thorne (six points) stepped up in the absence of Shaun Norris who fell awkwardly on his already injured wrist after a harsh foul from the Japanese.

Norris was not going to be denied a chance to play in the gold medal match against Iran though, suiting up alongside his team mates as Australia again jumped out of the blocks.

The creativty of Stibners was on show while Knowles was a menace around the key. Owning a seven-point advantage at the first break, the Rollers looked in control but Iran did not lie down, maintaining that margin at the main break before cutting the lead to four at three-quarter time.

With the match in the balance, Norris (10 points) and Brad Ness (nine points) stepped up as Jannik Blair and Tige Simmons set some expert picks to allow them easy baskets.

Russell (14 points) then put the finishing touches on the contest while Knowles (24 points, nine assists) and Stibners (15 points, seven rebounds, five assists) were standouts in the 78-60 victory.

The Rollers can now sit back and enjoy their victory in the following 11 months with the Paralympics to begin in Rio on September 7.

For the Gliders, their road to the Paralympics was made a lot tougher as only one spot was available from the AOZ qualifying tournament.

Having previously fallen to China twice in the pool games, they responded to their underdog status with an even first quarter but the Chinese soon began to pull away, taking an 11-point lead into the final change.

Australia set themselves for one last charge but they were unable to eat into the deficit as China won 59-43.

Coming off the bench, Cobi Crispin top-scored for the Gliders with 14 points and seven rebounds while Leanne Del Toso and Clare Nott added six points each. Amber Merritt struggled from the field, shooting 1-9 for two points, but made her presence felt with six boards, three assists and a block.