Steelers sweep Finland aside with an eye on top spot 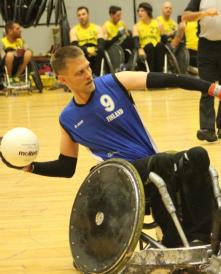 The Australian Steelers have sealed a semi-final berth at the 2014 IWRF Wheelchair Rugby Championships in Denmark, after thrashing Finland 63-43 overnight.

The 20-goal victory has now set up a blockbusting clash with Canada on Friday to decide the top two placings in pool A.

With the top two teams from both pools progressing to the semi-finals, Australia and Canada will both move through. But the final standings are still to be decided, meaning the two teams will be desperate to earn top spot and secure a less treacherous path to the gold medal play-off.

The winner of pool A will likely face world number four Japan for a place in the World Championship decider, while the second qualifier will face an unwanted semi-final showdown against Team USA, the reigning World Champions.

Australian captain Ryan said that although his team have no fears about facing the USA in the semi-final, he would love the chance to play against them in the final, the biggest game since London 2012. But he is taking nothing for granted.

“Things are going to plan so far. We were expecting that this match against Canada would decide Pool A. GB almost caused an upset, but here we are. We’re ready for the challenge,” Scott said.

“It’s going to be tough. We have got it over Canada at the moment I guess, and we’re very confident that we can do the job against them. But we are well aware that it is going to a battle. It’s going to be a war.”

Scott said his team will take plenty of confidence into the Canada clash, after a comprehensive performance against Finland in both offence and defence.

“As we always try to do, we got off to a really good start today and we were able to play at our tempo and control it,” Scott said.

“Finland play a very slow game. They often take the whole 40 seconds [on the shotclock] to score and that can be very draining sometimes, but we were prepared well for that. We didn’t let it frustrate us.”

Earlier in the day, the Canadians only just escaped with a victory over Great Britain, which kept their hopes of finishing on top of Pool A alive. The match went to double overtime.

Australia play Canada in the final match in Pool A on Friday at 8:30pm (AEST).