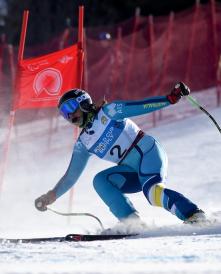 Vision-impaired skier Melissa Perrine has achieved what no other Australian female in her sport has achieved before – a podium finish in all five events at the IPC Alpine Skiing World Championships in Panorama, Canada.

Finishing with three world titles, one silver and one bronze medal, Perrine and sighted guide Andrew Bor have surpassed all of their expectations to achieve this rare feat.

Perrine and Bor finished first in their second run, a great achievement considering that slalom was the event the pair duo had least prepared for according to Australian Paralympic alpine coach Christian Geiger.

“Mel was in pretty good form in her second run. She had a slow top half, but her second half was pretty great with few mistakes,” Geiger said.

“Given that slalom is the event Mel likes the least, and we had put it on the backburner to focus on the other events, I’m very happy with how Mel and Andy performed.”

Geiger also believes that racing with confidence, as well as a different approach in training, were the key factors in Perrine finishing the campaign with a 100 per cent podium success rate.

“She’d already won three titles, so she was relaxed and not too fussed going into this event,” Geiger said.

“We also took a different approach to training after Sochi which took Mel to the next level. She was skiing really well before, but it didn’t reflect on her performance.

“This year we focused more on breaking down technique to turn her into a solid skier, and as a VI skier with epilepsy, we managed her energy levels closely,” he said.

“This might be me being pretty greedy, but I would have loved for the Team to come home with more medals. But in saying that I’m proud of all the athletes who competed and it feels pretty good to finish up in such a high place,” Geiger said.

In other results, sit-skier Victoria Pendergast finished the women’s slalom in sixth place (2:43.22) behind to Austria’s Claudia Loesch (2:03.28) who took out her third gold medal of the championships.

The Australian Alpine Ski team will now return to Australia for a well-deserved rest before commencing training for the start of the Australian snow season.

Official results are available at paralympic.org/alpine-skiing/calendar-and-results.