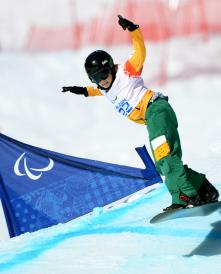 THE name of his sport conjures up the essence of an alpine experience -`snow’ – and Australian snowboarder Ben Tudhope is the name on everyone’s lips in Sochi.

Of the 550 athletes from 45 countries in Russia, 14-year-old Tudhope is the youngest – by 11 months from British vision-impaired skier Millie Knight, who turned 15 in January. She also carried the Union Jack as Great Britain’s flag bearer in last Friday’s Opening Ceremony.

But Tudhope is holding his own. British and American television networks have already interviewed him on the Rosa Khutor mountainside this week. Maybe that was due to his reputation of never falling.

“That is what all the other countries are saying,’’ Tudhope said. “I do fall a bit but when I fall, I always fall in a stylish way.’’

However, even those media commitments didn’t bring a smile as big as when Sydney’s Tudhope and fellow Australian snowboarders Joany Badenhorst (NSW) and Trent Milton (NSW) inspected and rode their Paralympic snowboard cross course on Wednesday soon after 30cm of fresh snow fell.

It was the first significant snowfall since February 27, or four days after the Winter Olympics ended and a week before the Paralympics started.

“It’s amazing. All week it has been sunny, hot and now we’ve got the snow right in front of our event so that’s really good,’’ Tudhope said referring to the snowboarding event starting Friday.

“Being on the trail, being on the course, is really exciting knowing that I’m so close to actually competing at my first Paralympic Games.

“The snow seems in tip-top condition and the course is really good,’’ he added.

“It’s not too challenging or not too easy. For me it’s near perfect and one of the best courses I’ve ever ridden on.’’

Snowboard cross makes its Paralympic debut at the Sochi Games. But only one class – for athletes with lower limb disabilities – will be contested. The International Paralympic Committee (IPC) is hoping to have upper limb and other classes added for the 2018 Winter Games in Pyeongchang, South Korea.

Snowboard has been part of the Olympic program since the 1998 Nagano Games.

Tudhope has cerebral palsy, which affects his speech and movement. But his family enjoy winter sports and have been the strongest influence behind Tudhope taking his snowboarding career more seriously.

In addition to his immediate family, his snowboard `family’ leading up to Sochi have mainly been Badenhorst, Milton and Australian Team staff – coach Peter Higgins and physiotherapist Joel Cooke. All were deeply affected by the death of national squad team-mate Matthew Robinson in a snowboard training accident in Spain four weeks ago. He suffered serious head and neck injuries and died from a cardiac arrest on the medical flight home.

A tremendous camaraderie has been built among the snowboarders in light of all they’ve been through.

“We’re all encouraging each other and lifting each other’s spirits and we ride together,’’ Tudhope said. “So it’s been really good. We help each other doing this and that.’’

So all that was left was to christen Tudhope with a nickname. `Tadpole’ would have seemed appropriate, since he’s the smallest member of the nine-strong Australian Paralympic ski team.

“I got given it at when we were in the Netherlands for our first World Cup and it kind of stayed,’’ he said.

“Pete and our physio Joel (Cooke) made up their own nicknames and they said to me `What’s yours?’ and Joel said `You can be hamburger’ and it just stuck.’’

Tudhope confesses he’s been known to savour the burger-and-bun when he is not preparing for elite racing.

“I will have one if it’s on the menu after the Games.’’