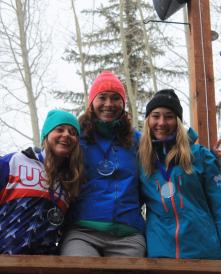 A career best performance by Australian Para-snowboarder Joany Badenhorst has earned her a silver medal overnight at the IPC World Cup in Aspen.

It was an impressive turnaround for the 19-year-old from NSW, who just 24 hours earlier, crashed in two of the three runs in the women’s Time Trial (lower limb impairment classification) to finish sixth overall.

But those crashes only seemed to strengthen Badenhorst’s determination, and that was evident in the head-to-head racing overnight.

In what is a new format for Para-snowboard at World Cup level, riders contest two individual time trial qualification runs to determine the seedings for the finals. Only the top eight competitiors progress.

With a place in the gold medal race on the line, Badenhorst exploded out of the gate and repelled two passing moves from Duce to seal the win and her passage to the final against world number one, Bibian Mentel-Spee.

But despite an impressive start,  a couple of small mistakes from Badenhorst was enough for Mentel-Spee, the reigning Paralympic champion, to secure the gold medal with a typically clinical ride.

Australian Para-snowboard head coach Lukas Prem said that while Mentel-Spee was flawless in the final, Badenhorst should be proud her own performance.

“You can get lucky in these races if someone else falls.  But Joany didn’t advance to the final because someone else made a mistake. She showed the better performance,” Prem said.

In the men’s event, 15-year-old Ben Tudhope fought his way through the two qualification runs to finish seventh.

Matched up against Mike Shea, the silver medallist in snowboard cross at Sochi 2014, Tudhope was able to apply some pressure on the American at the start of their shootout, but an error in the second turn made him lose exit speed and he was able to fight his way back.

“Ben wasn’t very lucky and is still a bit off the pace, racing fully grown athletes but he shaved time off throughout the two days of competition.” Prem said.

The next IPC Alpine Skiing Para-Snowboard World Cup takes place between 17-19 January in Big White and will feature head-to-head and banked slalom.

Both events will be contested at the upcoming 2015 IPC Para-Snowboard World Championships in La Molina, Spain, from 23-28 February. Around 80 athletes from 20 countries are set to compete.