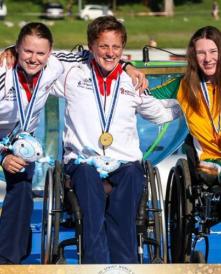 Australian Para-canoe athlete Susan Seipel has underlined her versatility by winning bronze at the Canoe Sprint World Championships in Milan overnight, and in doing so has qualified Australia’s first boat for next year’s Rio Paralympics.

29-year-old Seipel, who trains in Brisbane, finished third in the KL2 women’s final.

Seipel was born with a rare disorder characterised by fusion of joints and absent muscle formation in her legs, and only began her para-canoe career in 2012.

But she has been a high achiever across several sports, representing Australia in para-equestrian and holding several national age swimming records.

“I’ve done a lot more work in the past 12 months,” a delighted Seipel said.

“The plan was to go out and qualify the spot for Rio next year, and I’ve done that so I’m really happy.

“I think my start wasn’t the best, but I just kept going and made up for it. There was a bit of a wash that came through in the middle of the race, which was pretty random.

“It would be a dream come true to paddle at Rio, to get to my first Paralympics.

Curtis McGrath is one step closer to his dream of qualifying for next year’s Paralympics after a nail-biting win in his heat of the KL2 200 metres.

McGrath also won his heat in the non-paralympic VL2 event.

The former Australian soldier, who lost both his legs after stepping on a mine while serving in Afghanistan, beat one of the biggest names in world para-canoe to qualify fastest for the KL2 final.

“All is going to plan today,” McGrath said.

“I have won both my heats, so I progress through to the finals. And I did the unexpected and beat Austria’s Marcus Swoboda, who has not been beaten in five years.”

McGrath needs to finish in the top six on Friday to qualify a boat for next year’s Paralympics.