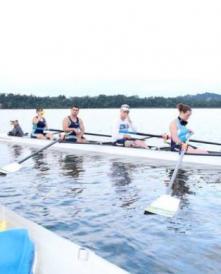 This is a boat with a difference: four rowers, three types of disability, two genders, but one collective goal.

Australia’s Legs Trunks and Arms Mixed Coxed Four are aiming to finish top eight at the World Rowing Championships in France, starting August 31, and qualify their boat for the Rio 2016 Paralympic Games.

In a sport that demands perfect cohesion and unity, this is a team that celebrates diversity.

Kate Murdoch and Sara Waitzer are visually impaired, Jeremy McGrath is a below-knee amputee and Alistair Chong has cerebral palsy.

“It’s a good challenging boat that’s for sure,” Murdoch says. “We are restricted by certain barriers and being able to work through that is a lot of trial and error.

“It’s barriers like trying to keep the boat straight, trying to keep in time – two of us are vision-impaired – so that’s a lot of trust. Every rowing crew has that level of trust, but it just feels like a deeper level somehow – rowing with people with varying abilities.”

Murdoch, from Sydney, was born with cone-rod dystrophy. Legally blind since she was 16, Murdoch still dreams in pictures and colours. She knows what a gold medal would look like.

“I can see in my dreams, I can see it happening,” Murdoch says of her Paralympic ambition for the 2016 Rio Games.

As well as relying on her teammates, Murdoch counts heavily on her young guide dog, Trixie, an honorary member of the crew.

“She’s there with me every day, I wouldn’t be doing what I’m doing without her,” Murdoch says.

“It was my dad that recommended rowing [to me] because you go backwards, you’ve got someone yelling at you, you don’t need to see where you’re going.”

McGrath, also from Sydney, was born missing the fibula bone in his right leg and with a shortened tibia. At 15, he decided to have the leg amputated.

He has a photograph at home, him as a child at the closing ceremony of the 2000 Sydney Paralympics holding an Australian flag. Now the design of the Aussie flag adorns his prosthetic leg.

“I’ve always wanted to be a Paralympian so it would be absolutely amazing to be at Rio,” McGrath says, explaining his entry to rowing.

“I was watching the rowing at the London Olympics. I didn’t know much about rowing, but I thought ‘it’s all upper body, so that’d be a good sport to try’. I found out very quickly it’s a leg-dominated sport.

“Everyone does bring something different to the boat and it does take time getting used to how we row differently.”

Another challenge for the team is geography. Murdoch and McGrath live in Sydney, while Waitzer and Chong are from Tasmania. Periodically they come together for training camps at the AIS in Canberra.

“Without the AIS we couldn’t really get together … we get a lot out of these camps,” Murdoch says.

Coxswain Jo Burnand is vital to the team’s timing, while the AIS camps have also been important for team bonding.

“My old leg used to be very squeaky, Kate used to love that leg because she would always know where I am, I could never creep up on her,” McGrath says, laughing.

Murdoch continues: “When we come together like this camp it’s working beautifully. That gives us the drive … this can work. It’s not ideal, but we’re used to challenges, this is just another challenge we’re going to take on.”

Photo with thanks to Rowing Australia