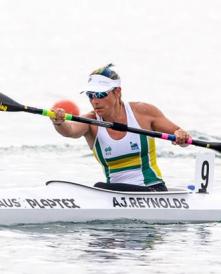 Day two of the ICF sprint World Championships in Milan looks set to be a big one, with the Para-canoe finals continuing.

Amanda Reynolds and Colin Sieders will look to follow in Seipel’s footsteps and secure Australia an additional two quotas when they contest their respective A finals from 10:20pm AEST tonight.

Reynolds won bronze in the K1 200 KL3 (formerly LTA) final last year in Moscow and looks set to be a strong contender once again after she won her heat on Wednesday to bypass the semifinals and move directly into the final.

In the process she beat last year’s world champion and the runner-up by recording the fastest heat time of 52.321.

Sieders had to work slightly harder to reach his K1 200 KL1 A final after holding out German Stefan Volkmann by 0.383 seconds to secure the third and final qualifying berth in his semifinal.

Sieders will be looking to match or better his sixth placing last year.

Finally, Curtis McGrath will be looking to go back to back and defend his V1 200 VL2 title.

Last year McGrath won gold on debut and is on track to do it again after he dominated his heat, finishing just under four seconds ahead of the remainder of the field.