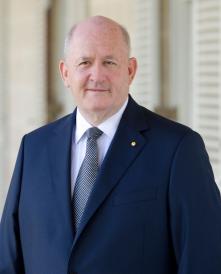 APC President Glenn Tasker said he is thrilled to have the support of His Excellency as Patron and welcomes his endorsement as Australia’s Paralympic athletes look ahead to the Rio 2016 Paralympic Games.

“We are delighted His Excellency Sir Peter Cosgrove has accepted our invitation to become our Patron,” Mr Tasker said.

“Having his complete support just over one year to go from the Rio 2016 Paralympic Games is a testament to our Paralympic Team and the role they play in Australian sport.

“His patronage also sends a very positive message to the Australian public to support our Paralympic athletes as they strive for success at the highest level.”

Thanking former Governor-General Dame Quentin Bryce for her time as patron, Tasker said: “We have been fortunate to have had a fantastic relationship with the Honourable Dame Quentin Bryce. During her time as patron, she attended the London 2012 Paralympic Games and played a substantial role in the launch of the Australian Paralympic Hall of Fame. We look forward to continuing a relationship with her.”

As patron of the APC, His Excellency will attend events, forge a relationship with Australia’s Paralympic athletes and support the Paralympic movement in Australia.

“We look excited about the involvement of His Excellency with Australia’s strong Paralympic heritage and having him support our Team’s success in the future.”