Florida warm up as elite Paratriathletes prepare for World Championships 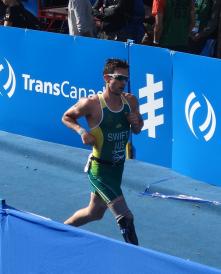 “Hello Florida….here we come!!” is the catch cry from the first members of the Australian Paratriathlon team who have arrived into the USA’s “Sunshine State” this week after contesting the World Paratriathlon Event in Detroit.

The Australians are preparing for next month’s ITU World Championships in Chicago and most have been training in the cold of the Canberra and Melbourne winters.

“They are clearly in good shape and demonstrating strong progression ahead of the 2014 World Championships in a month,” Perriac said.

“Four weeks in Clermont, Florida under coach Corey Bacon, will top them off nicely now, as they all have been training in challenging conditions through the winter in Canberra and Melbourne before this.”

Victorian Kate Doughty, competing in the PT4 class, improved on her performance from her most recent outing to win Yokohama.

The 32-year-old former Para-Equestrian star improved her time by five minutes from Yokohama.

She had the fastest bike split by more than a minute in Detroit and was only four seconds slower in her swim than Cunningham, a former Paralympic champion and swimming world record holder.

The youngest on the Australian Paratriathlon team, the 24-year-old again improved on her gold medal performance at the WPE in Yokohama in May, taking six minutes off her overall time. She finished in a time of 1 hr 18 min to claim second place.

Meanwhile her fellow Queenslander, Nic Beveridge continued to progress in PT1, finishing fourth, his highest WPE placing internationally.  He was the fastest swimmer and second fastest in the run.

Beveridge showed why he is fast developing to be one of Australia’s strongest, taking seven minutes off his personal best time.

He had an outstanding race to stay within the top five. With a more streamlined transition, Beveridge was close to claiming third and did well to finish in fourth and make his mark on the world stage.

At 28, Beveridge is earmarked for a bright future in the sport with the men’s PT1 built for athletes in their early to mid 30s.  The 2016 Commonwealth Games and Tokyo 2018 will bed his peak opportunities.

Victoria’s London Paralympic runner, Jack Swift, in the men’s PT4, did well to recover in time for this race after being struck down by a virus in the lead up.

Swift who had a solid training base over the winter months was unlucky to have then suffered blistering in his prosthetic leg caused by humidity and weather conditions in Detroit and did well to start the race, but was forced to withdraw in the second lap of the bike ride.

The group from Detroit will be joined the remainder of the team in the lead up to the ITU World Championships in Chicago between September 16-19.