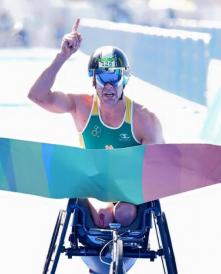 Australia’s Bill Chaffey has been chasing an Paralympic dream for years and today took a step closer claiming one of his toughest wins at the 2016 Rio test over the weekend.

Chaffey called on all of his experience to triumph over world class field on the Paralympic course at one of the world’s most famous tourist destinations, Copacabana Beach.

The four-time world champion survived a crash and two flat tyres on the bike leg to win his third ITU Paratriathlon in the PT1 category event. This win comes just 13 months out from the Rio Paralympic Games.

Chaffey knows the only way to achieve his ultimate sporting goal is to get tougher and that’s what he displayed when he held off his two greatest rivals Krige Schabort (USA) and Geert Schipper (NED), who claimed the silver and bronze medals respectively.

The 39-year-old wheelchair triathlete was behind after the swim and in trying to make up time crashed on the tough and technical Rio course. But the bike leg is his strength and he pulled back the deficit only to face two flat tyres, in the end winning by 16 seconds.

“It was a good race, the course is super flat and I’m used to it, it’s just like home on the Gold Coast.

“I was pretty unhappy with my swim, I swam off course toward the end but I knew I had a powerful bike and I knew I also had a powerful run but I crashed at one kilometre and had two flat tyres so I had to finish the run with two flats and a bit of bark off me too,” said Chaffey.

Although not a selection race it was an important one for Chaffey to get a look at the course and a good understanding of what he needs to train for.

“I wanted to get an idea of this course. I knew it was going to be flat and fast, but there are multiple turns. Having that knowledge and knowing what I need to train for is one of the benefits, and the competition is so strong.

“I loved it, I could hear people shouting ‘Go Aussie’,” Chaffey said of the crowds. “I think Copacabana Beach, with all of the tourists around anyways, and then you have more people coming to support the race and it’s really, really good.”

Chaffey will now return to the Gold Coast to prepare for the ITU World Championships in Chicago in September.

He will undoubtedly go into next years Paralympic Games as the favourite when triathlon debuts on the program.