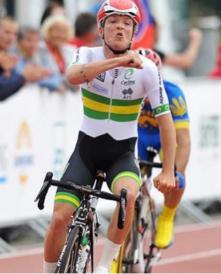 “It feels very, very satisfying! Possibly even better than last years win,” revealed Donohoe. “Going back to back was all I cared about this year.”

“It feels awesome to claim a medal in both, I also had a seven bunch race win streak I thought was coming to an end so it is a relief it didn’t!

“I’d put a fair bit of pressure on myself to win this one as it’s definitely my strongest event and ticket for Rio selection,” added Donohoe who maintains the honour of being both a reigning road and track world champion after claiming the scratch world title last April.

Cooke claimed silver in the women’s T2 road race, adding it to her gold medal in the time trial on Thursday. Jill Walsh (United States) crossed the line first just six seconds ahead of Cooke, while Jana Majunke (Germany) finished with bronze two minutes behind.

In the men’s C3 category David Nicholas (QLD) finished seventh as part of the main peloton. Gold was taken by a solo Masaki Fujita (Japan) with Alexsey Obydennov (Russia) leading home the chase group for silver ahead of Eduardo Santas Asensio (Spain).

Photo with thanks to UCI