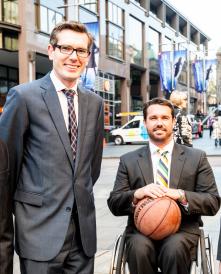 NSW Minister for Finance, Services and Property, Dominic Perrottet today announced a new $1 million partnership with the Australian Paralympic Committee (APC) that will see Paralympians mentoring young people seriously injured at work or on the road.

“Our Paralympians are heroes to our young people and pillars in our community, with their inspirational stories of struggle, sacrifice and achievement,” Mr Perrottet said. “This partnership will give young injured people hope and encouragement by forging an invaluable connection with sporting heroes who have overcome similar experiences and achieved at the highest level.”

“Their well-placed support and guidance could make a lasting difference to a person’s life, especially for those at their most vulnerable.”

“We are very proud of our enduring and important relationship with the NSW Government and we are delighted that this announcement will provide our Paralympians with more opportunities to share their inspiring stories and support others who have been affected by serious accidents,” Mr Tasker said.

Safety, Return to Work and Support CEO Vivek Bhatia said WorkCover NSW originally started the Paralympian Speakers Program, one of the Government’s longest-running sponsorships, which would be re-named and administered by the newly formed Insurance & Care NSW (icare) going forward.

“For more than a decade, past and present sporting greats such as Leisl Tesch and Joany Badenhorst have been helping to build safer workplaces through the popular Paralympian Speakers Program,” Mr Bhatia said.

“Now we’re looking to build on the success of the almost 15-year partnership with a new program that will give young people seriously injured in road and workplace accidents access to Paralympians as mentors.”

“The journey back to life is not easy. It takes a lot of hard work, dedication and a steadfast positive attitude. It also takes a strong support network, especially when times get tough,” Grant said. “I look back and remember those that helped me most through these hard times and now I’m grateful for the opportunity to be able to do the same for these young kids.”

The Program will officially be launched by icare at the inaugural Paralympian sports day challenge later in the year.

icare is a customer-focused insurance and care service provider that aspires to be a centre of excellence for long-term care needs, caring for people with the most severe injuries (road or workplaces), helping people return to work, and improving quality of life outcomes.

By NSW Government, Department of Finance, Services and Innovation
Posted: 21/8/2015