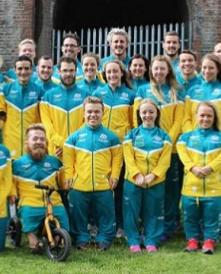 A group of 28 athletes will lead a world class IPC World Championship team set for Glasgow from July 13-19.

“We have selected a strong team with a variety of both experience and developing swimmers,” Paralympic Performance Manager Adam Pine said.

“I’m very confident with the way we have picked our team. The high selection standards from Trials in April has ensured we’ve selected a strong group of swimmers heading into Glasgow next week.”

Paralympian’s Blake Cochrane, Ellie Cole and Brenden Hall all recorded times at the Australian Championships in Sydney in April in their respective events that rank them number one in the world and will headline for the Australian team.

After double shoulder surgery and being told she may never be able to swim competitively again, Ellie Cole made a triumphant return to the pool at the 2015 Hancock Prospecting Australian Swimming Championships taking gold in the women’s 100m backstroke and 50m freestyle and recording the number one ranked time in the world for her classification.

This will be Cole’s third World Championship team after also representing Australia in Eindhoven 2006 and Durban in 2010.

Swimming his way onto his fourth world championship team, Cochrane produced the swim of the meet back in April when he set a new world record for his classification (S8) in the men’s Multi Class 100m breaststroke.

Hall who swims all distances from the 50m to 400m freestyle, as well as the 100m butterfly and backstroke in the S9 classification, will be a force to be reckoned with in the men’s 400m freestyle in Glasgow. He won the Australian Championship crown clocking a world class time of 4:10.90 in Sydney in April.

Cochrane alongside Hall, Lakeisha Patterson, Maddison Elliott, Madeleine Scott, Jesse Aungles and Daniel Fox will be returning to Glasgow’s Tollcross international swimming centre for the second year in a row after winning a selection of medals at the 2014 commonwealth games.

Thomas-Cane at 13 and Hodge at 14 are the youngest members of the team.

The seven-day World Championships gets underway on Monday 13 July and runs through until Sunday 19 July.