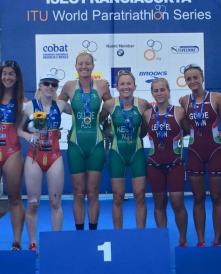 Despite last minute hiccups on the eve of the 2015 Iseo – Franciacorta ITU World Paratriathlon Event in Italy, Kelly has taken another step towards Paralympic qualification when Paratriathlon makes its debut in Rio next year.

Kelly and Jones needed to make the tandem journey into Iseo-Franciacorta and win to ensure they have enough qualifying points for Chicago – and they overcame the odds to do it – with expert mechanic Mick Brice playing a key role.

The best-laid plans almost fell apart at the last minute when one bag of bike parts coming from Australia arrived late and another didn’t arrive at all on the eve of the race.

Jones arrived into Iseo-Franciacorta with their new $20,000 Calfee bike from the US ready for Brice to fit it out but instead he had to scout around the town to buy “spare parts” to piece together the tandem machine.

“The second bag with bike parts did not ever arrive, so it was Thursday before they were able to buy the missing parts and get on the new bike for the first time,” said Triathlon Australia’s National Paratriathlon Program Manager Kathryn Perriac.

“The original plan was that Michellie would bring the brand new frame from the US, where it had just been made, plus the specially made wheels and Micko (Mick Brice) the mechanic, was bringing all the little things that actually make it work from Canberra and would build it in Iseo.

“But it didn’t quite work out that way.”

Brice worked feverishly to put the bike together and the girls delivered the goods with the Australians coming from behind to run past two teams off the bike to score a deserved victory in 1hour 17.33 seconds ahead of Spain (1:18.01) and Hungary (1:28.09).

“What a race,” Kelly posted on her Facebook Page. “Off the bike we had to chase down the Dutch and Spanish. A team effort with MJ and our bike Mechanic Mick Brice – woo hoo we did it.”

Kelly will return to Canberra (with her new bike) before leaving for the US with coach Corey Bacon and his training group to race the Detroit WPE, before heading to Florida to prepare for the World Championships, where she will once again be re-united with Jones, who is based in California.