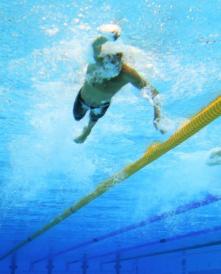 With only one day left of competition at the 2015 IPC World Championships in Glasgow the Australian Dolphins look to have a flying finish with a total of 23 medals so far; eight gold, six silver and nine bronze.

Current world record holder and defending champion Brendan Hall set the Aussie’s off to a soaring start taking on the men in the 400m freestyle S9. Hall who lost his right leg to chicken pox at a young age had the lead as soon as he hit the water and maintained it until the final touch.

Hall retained his world championship title with a gold medal win in 4:15.03 ahead of Italian swimmer Federico Morlacchi claiming the silver medal in 4:17.50 and David Grachat (4:23.79) from Portugal winning bronze. Timothy Disken finished in 4:35.48 placing him sixth in the world.

Hall said this year is all about preparation for next year’s Paralympics, so to come out of this world championships defending his title in the 400m freestyle is promising.

“This year is all about preparation and setting those processes for next year, so to come out of this world championships with a gold medal today plus a bonus one in the 100m backstroke is a dream come true,” said Hall.

“Over the next year my aim is to lower my time and close in on my world record for this event [400m freestyle S9] as well as trying to keep my high event program intact.

Maddison Elliott added another world title to her name in the 100m backstroke S8 taking on Team USA rival Jessica Long. Elliott and Long hit the 50m mark almost instantaneously before Elliott picked up the pace to take the lead for the gold medal win in 1:17.93.

Long finished not far behind in 1:19.07 to claim the silver with Olesia Vladykina (1:19.79)from Russia taking the bronze. Lakeisha Patterson took home fifth place with a final time of 1:24.08.

The men’s 4x100m 34-point medley relay saw Michael Anderson set the team off to a speedy start in the backstroke leg before Rick Pendleton took over for the breaststroke hitting the half way mark in 2:11.89, holding the team in second place.

Jesse Aungles was next to dive in for the butterfly portion of the race with Matthew Levy carrying the team to the wall in the final freestyle leg.

In the end the group were edged out of the medal podium finish by the Ukrainians with Levy touching the wall in a final time of 4:19.67 claiming fourth place.

Tiffany Thomas-Kane returned to the pool today in the women’s 100m backstroke S6 final to place fifth overall in 1:29.29.

New to the senior Dolphins team Braedan Jason stepped up to the blocks for the men’s 100m freestyle S13 final. In a race he describes as exciting and a good practice for Rio he clocked 53.73 to finish sixth overall behind a world record breaking and gold medal swim from Belarus swimmer, Ihar Boki (50.85).

“I am really happy with that race, it’s a really good personal best time for me which makes it pretty special, I’m stoked,” said Jason.

“Being on the senior team this year has been an incredible experience and great practice for Rio [Paralympics] which I hope to represent Australia in.

The 2015 IPC World Championships run from July 13 to 19 at the Tollcross International Swimming Centre, Glasgow.