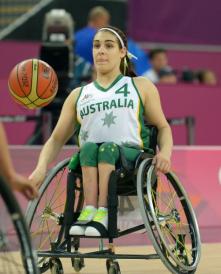 This game started physically with the Germany team trying to take the Devils out of their rhythm early. They won this initial battle drawing two key fouls on star Devil Amber Merritt and forcing her to the bench. However youngster Jess Cronje came on and defended the big opposition players, while Ella Sabljak and Sarah Vinci settled in and made key free throws.

The Devils coaching staff decided to park Merritt longer on the bench while Georgia Munro-Cook (6 points) and Georgia Inglis (4 points) helped lead the young Devils through a tight period. However the Germany high pointers had the better of the back end of the second quarter taking the smallest of margins (1 point) lead in to half time. The Aussie girls were a little flustered by the German defensive pressure and physicality and seemed to sway from to the game plan.

Returning from half time, the first 3 minutes were a carbon copy of the start of the game. It was a defensive grind and both teams struggled offensively! Germany were the first to settle taking an early 5 point lead. With Merritt struggling under double & triple team defensive cover, the court and shots were opening up for Munro-Cook and the low point Aussie contingent, with Germany continuing with physical defence.

This low scoring defensive contest would come down to the final quarter with Germany leading 32-31 at three quarter time, the question would be which team had the poise and execution to take this key pool match out.

Fourth quarter and the young Devils took the ascendancy in this crucial matchup, their team defence went to the next level and offence was flowing early through Sarah Vinci with the team executing some David Gould specials. However Germany would not lay down and through towering centre Barbara Grob (18 points) and Linda Dahle (14 points) they pressed and hit some big shots.

The Devils were not going to let this one slip though, and were tough when it mattered most. Finding 4 double digit scorers in what was to setup a great team win. Vinci (13 points & 5 rebounds), Inglis (10 pts & 9 rebs) & Munro-Cook (12 & 7) were the difference when Merritt was kept under control.

Next Devils match is Friday 3rd v China who are currently 2-0 but about to take on Great Britain here in Beijing, with both teams undefeated.